Don’t let the bastards get you down, sugar-hips: We’ve all outlived these kinds of moral meltdowns.

I’m referring to your recent 15 minutes of fame where your 15% blood alcohol level will likely net you 15 months in county lock-up.

During your brush with notoriety—as you’d probably remember if it wasn’t for that occupational hazard known as ‘blacking out’—you showed up at your favorite Wal-Mart with a slight methamphetamine glow and spent the next quarter hour tooling around in a motorized shopping cart devouring sushi and donuts and rotisserie chicken while swilling wine.

Now, it is fair to say that your choice of beverage makes your tale of particular interest to the readers of Intoxicology Report, which is, of course, a column about getting intoxicated on wine.

In fairness to them, however—at least those of them with what we in the trade refer to as ‘a good palate’—the total bill you racked up during your soirée was a whopping $32.36.

So, beginning with the premise that, following your shopping excursion, you had no intention of paying for anything anyway, let’s examine how you handled yourself.

First, according to the police report, you consumed ‘a box of sushi from the shelf’.  Now, I am not sure how they handle raw fish in Florida where your crime took place, but here in Michigan one would be hard pressed to find sushi in a box on a shelf.  That said, if what you actually did was eat a container of sushi from a cooler, I would assume that modestly, that would run a paying customer around ten dollars.

Additionally, you ate a cinnamon roll and a mini-muffin. Based on my Google research, this extravagance was probably worth a total of six bucks, because even if you only ate one of each, once you open a package, it is somewhat difficult to sell the unconsumed remainder.

Stick with me here, snicker-doodle.

Let us now turn our attention to the rotisserie chicken.  At my local Kroger outlet, such fragrant delicacies are quite reasonably priced at $6.99, and although I have never consumed one ‘in store’, the smell that wafts from the appropriately-vented package  is so enticing that I have been sorely tempted to do so—and more than once. As the non-Caucasians say, Josseleen baby: ‘I feel ya.’

The report is careful to point out that you consumed ‘the majority of’ the bird, which may or may not be an attempt to maximize your liability, although I think you would have been hung just as highly upon the gallows of justice had you consumed naught but a lone rotisseried gizzard.

Don’t confuse that with legal advice, however, because I am not licensed to offer it.  Neither is my pal Niagara Detroit, who nonetheless advises you to go with the ‘Well, EXCUSE ME for living…’ defense.

Here is where we start to have a problem, inamorata. 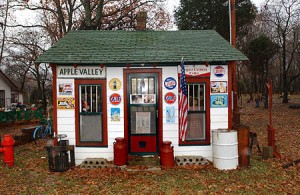 According to an article that appeared in U.S. Business entitled ‘Wal-Mart Turns Attention to Upscale Shoppers’, the pustulant hillbilly general-store-on-androgenic anabolics has ‘overcome its rural roots and downscale image to attract affluent shoppers.’

The piece goes on to say, ‘…the nation’s largest retailer is opening new stores this week with an expanded selection of high-end electronics, more fine jewelry, hundreds of types of wine ranging up to $500 a bottle, and even a sushi bar.’

So there you have it.  When I free-associate the concept of Wal-mart with food, I come up with Vienna Sausages, Funyuns, Velveeta Cheese—the only cheese you can heat without it getting all weird—and Steak-Umms long before I do sushi. So the fact that you, Ms. Elida Lopez, were able to do a personal honing radar lock on raw flying-fish eggs and tuna belly within your allotted fifteen minutes of fame indicates to me that you were in one of the upper-scalier Wal-Marts.

Thus, if you had the option of shoplifting a $500 bottle of 2003 Screaming Eagle Napa Valley Cabernet Sauvignon or a sub-ten dollar bottle of Vendange Sweet Moscato (both of which are the same size, BTW—25.3605 fluid ounces) , and chose to travel the budget-basement route for no conceivable reason than you don’t know shit from shinola about  wine, then, alas, after all the high-fiving and thumbs-upping I had planned in honor of your wild and wooly Wal-Mart whirl, I come to a single inescapable conclusion:

You are not as bright as your biography indicates.

This entry was posted in GENERAL and tagged Wal-mart. Bookmark the permalink.