Dishonest Non-Fiction is an Oxymoron

Gather ‘round, wiglets—let me tell you an honest story:

So sue me; I thought it said ‘Want to get some head’.

Since accidentally checking ‘Wine Writer’ instead of ‘Unemployed Drunk’ on the back of the career-path matchbook, I have discovered that the two pastimes are interchangeable.

Well, that’s not completely honest.  Actually, I wanted to go into internal medicine and I meant to check ‘Diseases of the Rich’ on the matchbook.  At that point, not only was I already an unemployed drunk, I was offering extension classes in it at the local library.

The late Ruth Coughlin. Sorry about that,  chief.

Okay, so here’s another honest story, and this one is true without the asterisk:  I used to write book reviews for the Detroit News, and one week I panned a book by an author that happened to be my editor’s best friend; she refused to print the piece, accusing me of being ‘too honest’.  I told her that I was the critic, she was the editor; as such, it was her job to edit out my honesty.

As a matter of fact, that’s precisely how I became an unemployed drunk in the first place.

I bring this up because last year about this time I wrote about running into a dude named Stuart Pigott, author of ‘The Best White Wine on Earth: The Riesling Story’ at Horizon Books in Traverse City.  Although this is not necessarily an honest book—Riesling is not the best white wine on earth—it is still pretty good wine book even if you are not obsessive/compulsive about one grape to the exclusions of all others. 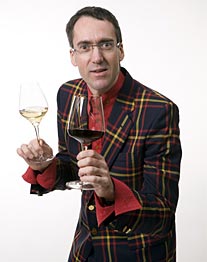 “I am a wild and crazy wine writer.”

In any case, at our Horizon Books encounter Stuart was hunched behind a card table, doing one of those dreadfully obligatory author appearances, hard-selling his hardcovers.

Having been there/done that, I can assure you that the loneliness of a long distance runner is nothing compared to the desolation of a writer at a book signing—it is even more demoralizing than ringing a bell in front of Walmart in December wearing a fake beard.  Because at least then, when people avoid making eye contact with you and act like they’re reading a text or try to find a different entrance, you can blame the Scrooge syndrome.  When you are in the bull’s eye at a book signing, it’s your hairy, homologous nards on public display, not Santa’s, so the total lack of interest can be laid at nobody’s doorstep but your own. 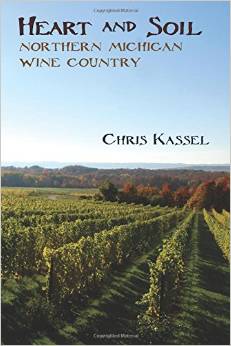 Well, as it happened, I spent a week one recent afternoon inside the very same bookstore, sitting at the very same card table, doing the very same soft-soap on my own softcovers.  In this case it was that lie-free lexicon of local lore, ‘Heart and Soil—Northern Michigan Wine Country.’

I emphasize the book’s somewhat excruciating honesty only because it’s key to what happens later in the story.

But first, let’s say that unless you’re in a literary pay-grade considerably above my own, the foundational understanding of any book signing is that it will be a humbling experience.  The grail is to keep it from being a humiliating experience.  And that can be gauged solely by the number of books you sell, since if you really wanted to make new friends and socialize with Northern Michigan wine people you’d go to tasting room or bar where at least you could drink and get loud.

Card-table duty is to peddle paperbacks, nothing more, and twenty books or more over the course of a couple of hours is incredible (in the honest sense of the word— ‘not credible’);  fifteen is commendable, ten is average, eight is humbling, five is humiliating.

I know, I know; I can hear the violin concerto from here—your D is flat, by the way. But the sharpest craw-sticker, I suppose—the serpent’s tooth—was the conspicuous invisibility of the very people the book is about.  Every winery profiled in Heart and Soil is within ten miles of Horizon Books; every one of them knew about the signing, and not so much as one poked a head in or raised an upright fist of solidarność—either for me writing books about them or for Horizon featuring books written about them.

And I can say (in honesty) that I have heard ad nauseum Northern Michigan wine makers whine about the lack of Michigan support for Michigan wineries—not unlike the way I am whining like an entitled little bitch right now.

So, at what point does refusing to support the very support you feel is your birthright become somewhat self-defeating?

At some point, isn’t the circle of the circle jerk supposed to close, so that we can all wash our hands and go home?

Does Heart and Soil Suck?

Well, for Christ’s sake—maybe.  I have to own that potentiality, although, even if that’s the case, I know plenty of people who have their social media pages plastered with pictures of themselves that were not exactly taken by Richard Avedon.  What they have in common, of course, is that the posters like these portraits—they believe they depict the light under which they think they deserve to be seen—generally blemish free and as pretty as DNA has sought fit to make them.

And I totally get that.  And respect it.

Unfortunately, that wasn’t Heart and Soil’s driving animus any more than it’s been the goal of anything I’ve ever published, and if one of the incoming torpedoes winds up being a nepotistic editor, I have taken the career hits like a man—a whiney little bitch of man notwithstanding.

I don’t find puff-pieces intended to nothing but glorify the interviewee to be any more fun to write than I do to read.

I’m not an advertising insert in the Sunday Picayune: I try to write honest profiles of wine people at frozen moments in their personal history and let the chumps fall where they may.  If someone feels ill-used, perhaps they are (although inadvertently), but more than likely, that’s the Klieg light under which they performed, and right or wrong, my interpretation therein. If they subsequently don’t want to put the book on their tasting room bookshelves, I can utterly understand them and there’s no hard feelings.

Take Dan Matthies, one of the hallowed figures in the Northern Michigan Hall of Fame—a founding father in the region, proprietor at Chateau Fontaine and a successful entrepreneur across the region.  Yet after agreeing to be interviewed, he either dodged every one I tried to arrange or else we had twin, amazingly consistent bad luck never to find a time that worked; instead, he provided me with reams of feel-good, saccharine interviews already published about him and told me to pull my info from them.  Alas, that’s not my M.O. and I made that rather caustically clear in my Matthies profile.  His unwillingness to carry the book in his little gift shop is completely justified.  In fact, I’d be offended otherwise—it would mean that he didn’t read it. 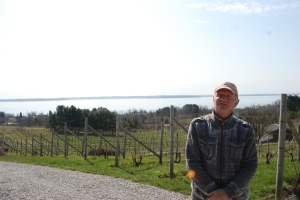 John Crampton next to his stack of wine books.

John Crampton at Willow makes slightly less sense to me.  Here’s a guy who solicited me to write a chapter on him, promised to carry the book in his tasting room, allowed me the luxury of driving four hours north in a rented car specifically to interview him on site, then hemmed and hawed so much when it came time to actually picking up a handful of copies to sell—on consignment and at a profit to him, mind you—that I finally shrugged it off and moved on.

Although trust me, his chapter is as glowing an overview of both him and his winemaker as I could write, because I actually thought both of them deserved it.

I conclude that the Leelanau Cosa Nostra and Old Mission’s one-for-all-and-all-for one Musketeers is so tight that any book that does not paint Rembrandts of them all, but tosses in a couple of Goyas and Boschs, is unfit for consumption.

Or maybe not.  I really don’t know.  What I do know is that out of twenty wineries covered, nearly all with favorable reviews, the total number (each of whom has a retail outlet on premise) that have carried through on offers to sell Heart and Soil is, to date,  four less than the number of books I sold at Horizon.

In other words, naught, zippo, nada, zilch.  Some support, huh?

One final honest story before I ride into the sunset:  In a life that even pre-existed critiquing books, I was an illustrator, and I was once commissioned to do a portrait of a dude for an album cover.  He was extremely handsome in a quirky kind of way, and I did my best to capture his remarkable physical reality.  I think I did, too, and he hated it.  So I re-did it so that he appeared extremely handsome in a non-quirky way and he loved it.

Suffice to say, that was the last time I compromised what my senses saw, heard, touched, smelled or tasted simply to turn a buck in the creative arts.  I could—and have—lived with myself easier as a panhandling alcoholic.

Onward and upward, then.

I’d say ‘live and learn’, but  I suppose I learned that lesson when I was twenty-one—and have soundly chosen to ignore it.

This entry was posted in Michigan and tagged Hear and Soil: Northern Michigan Wine Country. Bookmark the permalink.