Hybrids on the Down Low

The vines to Tony’s Ciccone’s left are producing some flop sweat, but not many grapes.  The rows are showing unmistakable signs of desperation.  The trellises are in DEFCON 3, as though the hassles, deadlines and frustrations of producing commercial quantities of vinifera in Leelanau Peninsula are finally getting to be too much.

A few canes show microscopic clusters; sad little pinhead bunches dangling between ravenous rose chafer beetles that are doing a number on the foliage.  And these are the healthy vines—the other ones have barely leafed out and it’s almost July.

This is an updated resume of Cabernet franc in Northern Michigan; these gnarled trunks are twenty years old but if you gauged by leaf growth alone, you’d swear they were planted last month.

To Tony’s right, it’s a different story.  It’s a better story; one written not by nature over Darwinian millenia, but by a hybridist in some laboratory in Alsace.  And as Frankensteinian as that may sound to ye lovers of all things non-bioengineered, unlike Mary Shelley’s opus, this is a story with a happy ending.

Especially in Northern Michigan, the hinterland of wine-grower sanity. 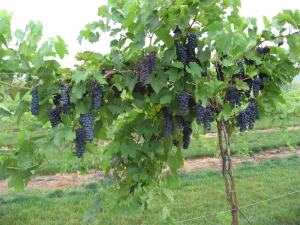 See, the second block of Tony Ciccone’s vines is vigorous and healthy—each row has a vibrant canopy bursting with vitality and a lust for life; dozens of happy little Bob Ross grape clusters are soaking up the sun like Cheryl Crow on a Malibu beach.  The past two winters saw temperatures dip to minus thirty and snowfall that was measured in yards, not inches, but to hybrid vines, the Polar Vortex proved to be little more than an inconvenient traffic light on the Autobahn of viticulture.

This block is planted to Maréchal Foch, a hybrid variety developed after World War I and introduced to Canada in 1946.  It was invented specifically for Great White Norths—it ripens early, chuckles in the face of fungi, and best of all, runs red lights on the Autobahn.

Ironically (or not, considering how weird Europeans are about wine), its use is severely restricted by the EU, and today, more commercial acres of Maréchal Foch exist in Leelanau Peninsula than in all of France, where it originated.

For the geek squad:  Although Foch is a teinturier (a red variety where both the skin and flesh is a deep red color) it’s a cross between Riesling, Courtiller Musqué (a Muscat variety) and Oberlin Noir, itself a Gamay hybrid.  Unless, of course, it isn’t; family trees can get complicated when tracing hybrid pedigrees.

What isn’t in question is that Maréchal Foch can produce unique red wines, rich and juicy with blackberry jam notes and a deep, smoky, almost Burgundian earthiness.

What’s even less in question is that nobody wants to buy it.

Up until now, for Tony and many of his colleagues, hybrids have been an afterthought. But this year, he says, there’s a reinvisioning going on:

“After back-to-back disasters, a third poor harvest will be unsustainable at many local wineries.  A lot of growers who never considered planting hybrids in the past are reconsidering the option.  Obviously, to survive, a winery has to produce commercial quantities of wine, and our vinifera has struggled with that for the past two years.”

Estate wines, those where the grapes are grown, crushed and bottled at the winery, may become an ever-diminishing portion of the typical Northern Michigan portfolio.  For the other labels, the ones that may be considered cash cows, grapes may be grown elsewhere, made under the license and still legally bear the winery’s logo.  Frankly, these grapes don’t even have to come from the United States.  The only restriction is that you can only use your appellation name so long as 85% of the bottle’s content comes from that viticultural area. That leaves the origin of a whopping fifteen percent of the juice up to your ethical discretion.

So, for the most part, even marginal harvests have produced enough homegrown vinifera grapes to keep the Northern Michigan industry afloat.  But as Tony’s blighted Cab franc proves, when the vines are beaten down at ground level, recovery is, in some instances, impossible.

It may be a better business decision simply to tear out the frostbitten plants and start over.

The decision of what, exactly, to replant is a something that is weighing heavily on local wine growers.

In part, barring a sudden rise of hybrid-ophile cults, the solution may be in blends that don’t use an unfamilar hybrid name on the label.  Tony Ciccone’s ‘Tre Rossi’, for example, is a beautifully crafted mix of Foch and two other red hybrids, DeChaunac and Baco noir.  The wine is soft and slightly sweet on the front palate, with dark mulberry flavors from the Foch, velvety tannins from the Baco noir,  pie-cherry acidity from the DeChaunac.

It’s a balanced, strikingly lovely glass of wine that for layered depth and nuance rivals any tart vinifera red from the area you’d care to put it up against.

A Spoonful of Vinifera Helps the Hybrid Go Down

Bryan Ulbrich of Left Foot Charley has a different handle on hybrids.  He proved it in his newly-bottled blend of Vignoles and Pinot gris, and I will say this without fear of contradiction, even from greater mortals:

If you tell me that don’t like this wine, you’re either a liar, a poseur or somebody who has consumed so much vinifera-flavored Kool-Aid that you have blinders on your palate.

Vignoles was developed in the late 1930s and was originally claimed as a descendant of seed parent Subereux and some type of Pinot Noir clone, perhaps even Chardonnay—although I found references to indicate that this is by no means genetically confirmable.  Whoever be the baby momma and the deadbeat daddy, the variety is superbly suited for Northern climates: Its bud break is unusually late; thus, frosts that ravage other budding vines won’t touch Vignoles.  The grapes are small, and have an uncanny ability to retain acidity while packing on the sugar, so the wines produced tend to be fat, tart, and often present a profile of tropical fruit; pineapple and guava especially.

Not here, though.  Ulbrich’s blend is exceptionally steely and clean-tasting, beginning with a burst of ripe Bosc pear that may come from the Pinot gris—a Left Foot signature variety drawn primarily from Tale Feathers Vineyard in Old Mission Peninsula—and finishing with a juicy bite from a crisp green apple.  The interplay of these two flavors, packaged in a lightly spiced sheath of candied ginger and honey, showcases each as individuals and an amalgamated whole.  That, I find intriguing, unusual, and unstoppably delightful.

Another facet of Vignoles’ quirky personality—one that can be seen as a gift from heaven or a hopes-dashing end to the harvest, depending—is its susceptibility to Botrytis bunch rot.  This is the same fungus that turns your strawberries grey and mushy, but when grapes are infected under ideal climactic conditions, they turn brown and shrivel up and produce a concentrated, syrupy juice that can be fermented into a hedonistic, molar-crumbling sweet wine.

What’s required is a warm, damp early autumn followed by a spell of dry weather later in the season. Vignoles berries raisinate, and the fungus adds additional sugars, glycerin and acid, magnifying flavor and intensity.  Grapes so affected are often picked individually (a painstaking but necessary step to assure that no grapes infected with other, undesireable disease fungi make it into the batch) to produce a  honeyed ambrosia that ranks among the finest dessert wines in the world.

Thus, in terms of self-confidence, even in a room overloaded with blue-blood vinifera, you would think that there is no need for this hybrid to hide behind a lyrical nom du plume. 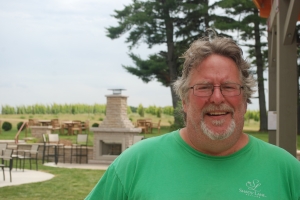 At Shady Lane Cellars, Adam Satchwell’s 100%  Vignoles is a sappy, penetrating perfume of apricot, pineapple, vanilla and coconut and a succulent, mouth-filling sweetness braced by a high note of acidity.  Now that’s a wine whose grape  deserves to be in the spotlight, taking a center-stage bow at the banquet finale, but it isn’t.  Shady Lane’s 2012 award-winner performs under the stage name  ‘Coop de Blanc’; ‘Vignoles’ does not appear on the front of the label, and if it’s on the back, well—nobody reads the back of a wine label except reclusive people drinking alone at breakfast.

That’s the trial and tribulation of being a hybrid wine grape, the Dangerfield of drink, the Jeb! of juice, dropping the name in a grab for an electorate, sliding in the hybridery on the down low, like a unpopular rider attached to a Congressional bill. 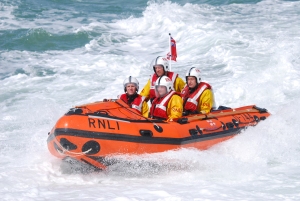 In Michigan, wine folks often have conversations about our ‘signature’ grape, and although you’ve got Riesling camps and Pinot gris camps and Cabernet franc camps, there is no faction (except maybe me and Bernie Rink) that casts in our lot with the hybrids.

And how silly is that?  Do you know what vita naviculam means?  ‘Life boat’.  If nature sends you one, I don’t see how it pays to worry about the color, the pedigree, the origin or the Latin.

The only thing that makes sense to get on board.

3 Responses to Hybrids on the Down Low