When you reach the top of the gravelly incline that leads to Willow Vineyards, you are confronted with the most iconic view of Northern Michigan wine country that exists. Grape vines tumble down a fertile slope to a line of stately pines, beyond which the West Arm of Grand Traverse Bay sparkles off towards Old Mission Peninsula. This is the visual that leads countless stories about Michigan wine; this is the background for selfies and group shots for nearly everyone who stops in; this is the ‘scenic outlook’ that makes visitors from Sonoma, from Tuscany, from Bordeaux say, “Ah, I see what you mean…”

In short, this is the money shot.

As for precisely how much money that shot cost, John Crampton doesn’t want to say.  He tends to be a humble guy, unwilling to brag, ready to spread credit through ‘the team’ as evenly as compost in the vineyard.  That goes especially for winemaker Chris Guest and John’s wife Jo, who (he reminds me several times in the course of the morning) came up with label monikers like Sweet Rain Chardonnay and Roadtrip Riesling—and further, that if you’re thinking of nicking the names, they’re copyrighted.

He’ll also point out that thirty years ago, when he first bought the property (then Hawkins Dairy pastureland), Jo made more money waiting tables than he did renting out the handful of cottages he bought at the same time.  This was before growing grapes occurred to him, although, after spending some time working for a pre-sparkling wine focused Larry Mawby, he realized that his windswept hillside, primarily clay in an appellation that is mostly sand, might produce varietals with a unique take on Leelanau terroir.

These were early days in the industry, and when he opened Willow in 1998, it was only the fifth winery on the peninsula.

Thus, as you might imagine, he bought the property primarily for the paradigmatic perspective, and unlike several of the wineries that have opened and closed doors since, the perspective remains.

As to how much that perspective set him back, again he obfuscates, though ultimately he points to the car I rented for the drive north and says, “Less than that Fiat 500 cost Enterprise.”

Humility is an aspect of ego that I encounter frequently when interviewing winery owners; generally, it is feigned and fairly transparent.  With Crampton, I read it as genuine.  A somewhat slightly built fellow with the big handshake of a man who’s spent his life doing outdoor labor, he’s someone who understands that in the larger flow of things, we’re nothing but workaday pogues working to put wine on our family’s table—it’s just that some of us make it better than others.

Apparently, no need to choose

It may not have been wine that lured the Cramptons north, but it was certainly the north that lured them north.  John had an uncle who ran a Bible camp south of Traverse City and he spent summers here as a kid, getting a dose of Jesus and fly fishing that hooked him as securely as a Camtec in a brook trout’s maw.

“Up here,” he says with wistful reverence, “is the only place I ever really wanted to live.”

And live he does, in the sort of fantasy low-key winery existence that a lot of us dream about.  He produces about a thousand cases of wine a year, mostly Chardonnay, Pinot gris and Pinot noir, mostly around $20 per bottle and all so soundly produced that the Cramptons sell every drop they make out of the Willow tasting room.  That eliminates the need for distribution and the attendant headaches, and since he is perfectly satisfied with that output, it scuttles the need to search out expansion capital.

Of course, margins in that particular business model tent to be razor thin, and the genuine humility borne by the industry is in the vineyard: Two barbarous winters back to back left the eight acres Crompton has planted to grapes considerably worse for the wear.  In fact, in early May, the vines showed no sign of life to my layman’s eye, although John pointed out some vine bleeding—an osmotic process through which organic acids, hormones, minerals and sugars are forced up from the root system—and, and if you squat down with a magnifying glass and a hearty dose of optimism, the beginning of bud break.

“We’ll have to wait to see how the season unfolds,” he confessed.  “I really can’t say how well they’ll produce this year.”

For many northern winemakers, the days of 100% estate wines are gone in all but the most spectacular of vintages.  Figure that a harvest of 2½ tons of grapes per acre results in about 150 cases of wine; eight acres at that yield would be 1200 cases, which is about what Willow produces.  If yields are less, you either make less or buy grapes from somebody else. 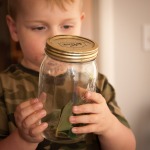 To Crampon’s credit, the grapes he purchases are contracted from other Leelanau vineyards, so he remains true to the terroir he helped define.  Still, this is the point where even those overblown wine business egos must genuflect to the fickle finger of fate.  The climate at Michigan’s 45th Parallel treats winemakers like bugs in a Mason jar: Mother Nature is experimenting with men like John Crampton as much as they are experimenting with her.

“If you are going to farm up here, you’d better know your way to your knees,” he says.  “But we’re dealing with the earth, and the earth should be like that.”

True to his word, Crampton says that he’s willing to replant the whole eight acres if last winter proves to have been too much—but with lessons learned: “I’d keep the vines lower to the ground—a cover of snow insulates them against the colder temperatures that blow in from the Bay if it freezes over.”

But that point may be moot.  There’s an old saying that I just made up:  “Old winemakers never die, they just cash in the view.” 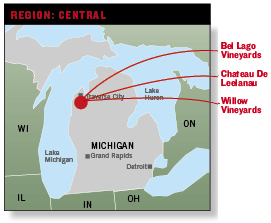 So you wanna buy a vineyard…?

Indeed, Willow has been for sale for a while now, and I suspect that is one of the reasons why the tasting room lineup—which I remember as being strictly Burgundy varietals—has expanded to include Riesling and rosé (which, though made from Pinot noir, expands the portfolio as does the erstwhile mentioned, fully-trademarked mind you, Sweet Rain: slightly sweetened Chardonnay).

How much would that archetypal overlook  cost you?  Again, Crampton shies from precise numeration; he says that if you’re interested, talk to his realtor.

But if I was a betting man, I’d say that if the price he paid was less than my Fiat 500, today it’s worth more than Fiat’s North American division.