I Pledge Allergic To The Flag

I own up: I’m too big a pussy to join the Marines, I can’t remember the words to the National Anthem (nor could I hit the high ‘f’ if I did); I turn the thermostat to 90° in the winter and damn climate change; I eat five thousand calories of saturated fat a day and my voter turnout record is about the same as my attendance record at Taylor Swift concerts. I talk a good game, but I spend more time watching Sopranos reruns than I do reading smart-people books and I couldn’t name my Congressional representatives if you held one of my numerous loaded weapons to my head.

In short, I am a typical American, just like all y’all.

And I grew up reciting the Pledge of Allegiance in school, hand dutifully clutching my left pectoral, solemn as an undertaker. But if they were waiting for me to turn into a raging patriot or a humble servant of He-Whose-Name-Must-Not-Be-Invoked-In-Public-Schools, neither contagion has yet taken hold.

I had no major objections when my own kids were put through the same time-wasting regimen at their schools, although I did tell them it was okay to finish the Pledge of Allegiance with the assertion “Hell no, we won’t go; we won’t die for Mon-san-to.”

It doesn’t hurt to remind the New Boss that some of us won’t get fooled again.

As for loving my country, that’s a pretty abstract concept.  I’m glad I live here (if that’s what it means) as opposed to living in some flyblown, ebola-ridden dung hut in Equatorial Congo, but if you really expect me to die for America, at least do me the solid of not making me pay taxes in the meantime.  Otherwise, the proposition strikes me as pretty lose/lose.

I respect, and in some bizarre, head-shaking way, admire those of my contemporaries who performed military service.  As much as I bleed for the families of those who didn’t return, I can’t imagine the scant comfort they must take when informed that their loved ones died ‘protecting American freedoms’.

Because, of course—cutting through Uncle Sam’s rhetoric—there hasn’t been a single war my lifetime waged to protect what I—a workaday pogue from Detroit—recognize as ‘my freedoms’.

And I suspect, through their tears, that most of the parents and wives and children of those brave fallen soldiers realize it too.

With my father’s generation, it was a different story, and I have little genuine doubt that the flag-allegiance-spouting patriotism and the ‘Freedom Isn’t Free’ jingoism under which we’ve labored as a nation since V-E Day is very similar to what junkies call ‘chasing the dragon’.  That is, a fruitless and feverish quest for the original, Aristotelian-paradigm buzz which we never, ever find.  It’s not until the addict’s mind truly grasps the idiotic impossibility of pursuing such a dream that recovery can begin.

Maybe the same holds true for our collective search for another nurse to kiss.

Sommeliers Who Make You Go ‘Huh?’

I mention the Pledge only because, in 2015, when anybody else mentions the Pledge, it never seems to be in an entirely sane context.

For example, a broad proclamation made yesterday on social media by Jillian Dowler beneath the text of the Pledge read: “I say this at the beginning of my meetings. How about you?”

Hang on, Jill: According to your resume, you’re a sommelier at JD La Vie Specialty Wines.

Thinking out loud, I recall many meetings I held with staff during my decade as a sommelier, and I assume that had I ever started any of them (let alone all of them) with a mandatory declaration of loyalty to Big Brother in Washington DC, I would have been asked to sign a different pledge; the one with the twelve steps.

Ain’t No Cure For the Red, White and Blues…

My message to my kids is clear enough:

If you want to enlist, I have no choice but to support you.  But don’t let anyone in authority bullshit you into thinking that stepping on an IED in Mosul is an act of tangible patriotism or that by doing so, you are defending anybody who lives in your house, on your block or in your community, or, for that matter, anyone outside your immediate military unit. 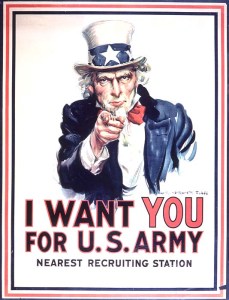 As a teenager you are susceptible to the psychological mandates of doing stupid, dangerous things: You want to fit in with the crowd, you have a false sense of invincibility and a genetic need to show off your titanium, bad-ass balls.  These are, quite diabolically, the very traits that recruiting sergeants love to exploit.

If you are really concerned with defending America and her freedoms,  I recommend instead that you get a degree and set up a medical clinic on Wyoming and Orangelawn in Detroit.  Open a law office in downtown Camden or Chicago or New Orleans or Oakland and cater to people who need representation of a quality they can’t afford.  Learn to hammer a nail and build HUD houses.  Volunteer at a soup kitchen.  Tutor inner city kids in English and math.

If you want to pledge allegiance to anything, pledge it to your family, your neighborhood and your future:

And in return, I pledge to you that as a nation, we will be better served than if you become another name on another slab in Arlington.