Carménère For The Holidays

The sum total of my social media prowess is writing something inflammatory and hitting ‘Tweet’. The convoluted netherworld of hashtags, mobile device aps and tweeps retweeting tweets I leave to my technological betters, meaning anyone who is still in high school. 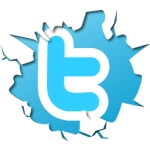 Nonetheless, I was asked to join an online chat that required I put a pound sign before the words ‘CarmenereDay’, and by the time I figured out how to do that, the damn chat was over. Nevertheless, I ended up with a carton of Carménère in advance; a fine selection from Chile, where this many-faced grape has been raised in status to somewhere between icon and godhead. They ranged in price and character, but proved—at least in this group, which I tasted blind—a distinct correlation between sticker and stature.

Carménère, as you recall, is the Stuart Sutcliffe of Bordeaux—the Sixth Beatle. Not Pete Best, the Fifth Beatle, who was fired but still managed to make millions in residuals from a single album, but poor Stu, who died on the vine at the age of 21.

Petite Verdot—the most expensive grape now grown in California—may be the Pete Best of Bordeaux. Carménère plantings have all but died out in that part of France, and most people speak of the five—not six—classic grapes of the region.

In Chile, the transplanted variety has found an almost supernatural Happy Hunting Ground. To reach its true potential, Carménère requires a long, hot growing season with an overdose of sunshine; these are amenities that are often luxuries in Bordeaux, but come as standard issue in Chile. Unripe Carménère picks up a striking pepper vegetality in the glass and may be blisteringly acidic. With an extended hang time, the acid mellows and a rich parade of sweet dark fruit flavors emerge along with a distinct box of spices, notably cardamom and black pepper. 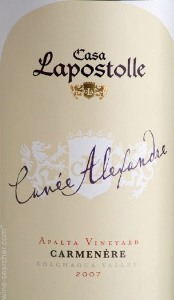 Carménère’s biggest Chilean irony is that, until the mid 1990’s, nobody was exactly sure what it was. It had been introduced to the South American coast as Merlot, and even when DNA analysis revealed the grape’s true identity, winemakers continued to release it under the name of the more popular and pronounceable variety. It was not until 2007, when French-owned Casa Lapostolle released a single-variety Carménère that blew the socks of critics that the Chilean wine industry realized what a marketing gem they had.  Since then, ripe, regal, rambunctious wines from the region have made remarkable ripples in the sea of trendy reds, and the ones I sampled for Carménère Day showed consistent quality and a certain thematic integrity. The wines on the lower end of the price spectrum, while not flawed, were far less interesting than the wines that were only a few dollars more. The conclusion I drew is that the sweet spot for price/value ratio appears to be around $20, where the fruit is lush and the tannins are tamed and the acidity held in check.

And yeah, feel free to Tweet that if you can figure out how.

MontGras Carménère Reserva, 2012, about $12: Somewhat clumsy up front, with new oak cream and an odd nose of smoked meat; the wine is quick and rather pleasant with a candied fruit appeal, but it dissipates quickly with an instantaneous drop-off at the end.

Maquis Carménère, 2011, around $20: Needs a minute to open up, then the nose gradually fills with aromas of sweet rhubarb, camphor, blackberry; the palate is somewhat thin, but balances out with yet more time in the glass, offering black currant and wood smoke along with mouth-coating tannins.  If the fruit could survive it, the wine would benefit from another year in the cellar.

Los Vascos Carménère Gran Reserve, 2012, around $18: A screechingly good value; ink black in the glass and filled with chocolate-dipped cherry scents along with sharp, bright fruit. The palate shows tea leaves and cassis and a crushed-rock minerality that blends well with rich, integrated tannins.

Santa Rita Medalla Real Carménère, 2009, around $18:  And earthy, spicy nose above a whiff of barnyard and spark of ripe red fruit.  In the mouth, it shows a warmer undertow of cherry cobbler.

Santa Carolina Reserva de Familia Carménère, 2011, about $22: A lush and flamboyant wine filled with mocha, cedar and an appealing touch of bell pepper; the bouquet is echoed in the palate with sweet dark fruit and an interesting, chocolatey finish. (The Santa Carolina spec sheet refers to this wine as ‘nervous’; presuming something was lost in the translation.)

Montes Alpha Carménère 2011, about $24: Cocoa powder, blackberry jam, light toasted cinnamon in the bouquet; the midpalate is sharply acidic with some lingering fruit and a slight tannic bitterness, but well integrated into the body. 10% Cabernet Sauvignon.

Maquis Viola Carmenère, 2009, around $55: Nearly unplumbable depths of plum and crème de cassis; a rich, profoundly deep bouquet filled with intense fruit, focused blackberry and sweet spice. Silky but still aggressive in the mouth, it shows a wide and sophisticated range of tannins. This is a stunning wine that should benefit from 4-5 years of cellaring and keep easily for 20+ years. 15% Cabernet Franc.

This entry was posted in CHILE and tagged Carmenere, Chile wines. Bookmark the permalink.