Saved By The Bell: Willis Hall Winery Is Down, But Not Out

Like a lot of whizbangs from his generation, John Bell sidled into his wine compulsion via Mateus and Lancers—those primitive, popular Portuguese pots of plonk that in the prehistory of American wine appreciation were revered simply because they were wine, as opposed to being Schlitz Malt Liquor or Vat 69.

“The beer we could afford in college were basically headaches-in-a-can,” says John, “and cheap liquor never went down right. I discovered a taste for simple, pink and off-dry, and in those days, that meant wine.”

Armed with an engineering degree from Penn State, Bell was hired by Boeing and moved to Seattle where a ladder-climb in the aerospace industry exposed him to the more sophisticated palates of the executive class.  He recalls his watershed moment—when he shed wines which were about as complex as water—as being a single sip of Jordan Cabernet, circa 1980.

That’s when, as he puts it, “I understood what wine was all about.”

He found a local fellow called Richard Kinssies—a Seattle entrepreneur who started a school for local wine lovers who were just beginning to appreciate the incredible wine growing region with which they shared a state.

Over the next twenty years, Bell learned all the esoteric wine stuff he could without actually getting his hands purple, then in 1999, ready to party like it was indeed 1999, he joined a Boeing winemaking club which allowed members to buy grapes directly from the many phenomenal growers in Eastern Washington.

He’d learned his Kinssies well, and that first year, blending wine in his garage from the ton of merlot, cabernet and syrah he picked up, he produced three gold medal winners at the following year’s—and surprisingly prestigious—Boeing Wine Club Competition.

Although those (and most of the many awards he’s won since) are gathering dust in a steamer trunk in his attic, Bell came out of the experience a full-blown addict.  By his own admission, he was hooked on aromatics and flavors, and by 2002, he realized that his wine was good enough to go commercial.  He retired from Boeing, cashed in his 401 k and formed Willis Hall Winery, which not only sounds classy, but combines the middle name of his father with the surname of his grandmother.

Continuing to operate out of his garage, he put to use his engineering know-how and built a custom array of winemaking equipment, and the stuff he released under the Willis Hall label was so good that in 2006,  Seattle Magazine named John Bell ‘Best New Winemaker in Washington’.

But alas, gentle reader, this is ultimately a tale of woe, and unless I get my literary train back on track, you may see it as nothing more than a maudlin meander down memory lane, and not (as intended) as an introduction to the Antichrist known as ‘local government’.

“As single person without a commercial license,” John Bell explains, “I can produce 100 gallons per year which I can’t sell, offer to auctions or give away to friends at Christmas.  All I can do is drink it, bathe in it or pour it down the drain.”

In other words, the government forced him to incorporate.  By nature, Bell is not a business man, treating wine as art, just as the root of ‘artisan’ winemaking suggests.

So from the outset, the relationship between John and the feds—as well as the local Snohomish County Schutzstaffel—was strained, and not in a good, gravity-feed filtration sort of way.

Because he had no need of a growth plan and could produce his targeted 2500 cases of wine per year using equipment he had in his garage, after jumping the financial and time-wasting hoops required to get a commercial wine license, federal approvals and county permits, he remained where he was and did what he’d always done, only now with a license to sell.

He also opened a perfectly-legal, by-appointment-only tasting room, immediately allaying fears that he would be attracting party barges to his quiet, cul-de-sac Marysville neighborhood.

All was well until 2007, when the county suddenly decided that he was not zoned to do what they’d said for the past three years that he was zoned to do.  They gave him ten days to cease all operations or face $250 per day in fines.

All his WTF? face-to-face meetings came to naught; the cockamamie county refused to budge and quickly, panic mode set in—having retired from Boeing, Bell had already spent his retirement funds launching Willis Hall and it had become his livelihood: One he entered into specifically because Snohomish County told him he could.

Ten days later, he found his garage festooned with OSHA-orange signs declaring that he was a crook.

For Whom The Bell Toils

So, despite the ludicrosity of the whole situation, John hired an attorney and a land consultant, paid the requisite fines (including the county’s mandatory advertisements in local newspapers announcing his crookery), and petitioned all his neighbors for a thumbs up.  Most them were not even aware that he was running a commercial wine operation, and when they found out, far from being outraged, a few applied for jobs. 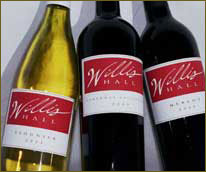 Tens of thousands of dollars in fees and fines and hundreds of thousands of dollars worth in wasted wine (unable to sell it or bottle it legally, $300k worth of tanked chardonnay oxidized) later, a sympathetic quintet of local councilmen took up his cause, helping him to rewrite the zoning code to permit him to do precisely what he’d already been doing.

It passed, with the stipulation that in order to qualify, the original license had to be granted before 2003, which left John Bell, Winemaker as an army of one.

Bell’s Law was not appreciated by the Snohomish jackboots, who retaliated by sending in the county Fire Marshall, who promptly decided that he needed to either set up a pumping station on his property to increase pressure from the curb-side hydrant or install a $30,000 fire suppression unit inside his garage winery—despite the fact that wine is notoriously unflammable.

With no choice, he coughed up the dough.

In 2009, a stroke of fortune finally hit:  The part of Marysville where he lived was annexed by the city, new regulations came into play and Snohomish County harassholes had to find other entrepreneurs to bully.

The threats evaporated like fog on the slopes of Mount Pilchuck, and the new Fire Marshall paid him a visit, giving him such a clean bill of health that he was allowed to remove his hot-shot, high-priced, utterly pointless fire suppression system.

And That Would Be That, Except…

…the money the intervening years had cost him was so staggering that neither John Bell nor Willis Hall Winery has yet surfaced from the inland sea of bullshit formed when the county’s bullshit sluice gate opened.

This year, far from his customary 2500 cases of wine, he will make a total of a hundred cases, all white, which he will sell out of quickly.

As for the thousands of gallons of inventory that remains in barrels?  He hasn’t recovered sufficient cash flow to bottle it.  Meanwhile, the fact that you can only barrel wine for so long before it becomes undrinkable is still giving Bell plenty of late-night agita and attendant insomnia.

“Recovery plan?  Survive another year, that’s it.  Succession plan?  When I die, I stop making wine.  That’s my exit strategy.”

While John Bell is still alive and sleepless in Seattle, I’m going to charge any regular reader of this column to crash his website (not in a Boeing way) and consider buying a bottle or two of Willis Hall.

It’s high time that the Bell bell tolls for them, in Snohomish County and in all counties everywhere across the planet.

2 Responses to Saved By The Bell: Willis Hall Winery Is Down, But Not Out