Nicolas Idiart has one of those strikingly handsome, masculine faces that makes even straight guys sit up and take notice, then recalculate our own sad position on that irrelevant ladder of total relevance, realizing that we’ve just moved down another rung. 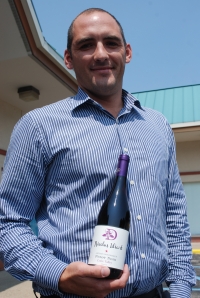 Plus, he can make wine like a BAMF, pinning down the bare-bones magnificence of three of my favorite grapes from one of my favorite wine regions, Loire.  Blatantly obviously within the quartet of Idiart wines I tasted was a solid understanding of Loire terroirs, pure as the driven terre blanche and no need for manscaping, Grecian Formula 2 or whatever else it is we lower-rung metrosexuals do for attention.

Idiart is the youngest graduate of Bordeaux’s prestigious Ecole du Vin at Blanquefort, and today, only thirty-three years old, he has assembled an imposing résumé that includes winemaking in New Zealand and Australia, wine sales in the United States and now, his own artisan portfolio under the Maison Nicolas Idiart imprint.  I tinkled glassware with him yesterday afternoon, and was suitably blown away by his clean, expressive Loire lineup—as pure a portfolio of unadorned, revelatory wines from this often-overlooked sliver of northwestern France as has lightened my doors in years.

Maison Nicolas Idiart Muscadet-Sèvre et Maine Sur Lie, 2013, around $15:  Green-tinted and grand, flinty and filled with finesse; the wine shows crisp lemony alacrity, a touch of salinity, a little peach and a lot of cleansing damp stone throughout.  That may in part be down to the mica schist upon which the melon de Bourgogne vines thrive; Muscadet may come from any of several, ancient, many-layered soils, and this one produces a distinct minerality that cleanses the palate and shivers the timbers.

Maison Nicolas Idiart Sauvignon Blanc, 2013, around $14:  A sumptuous, affordable introduction to Loire’s adroitness with sauvignon blanc, the second of the three white wine grapes that make up the bulk of its planted acreage—or hectarage, or whatever.  The wine is from Touraine, and from juice that was either free-flow or from the first pressing, leading to a lot of grapefruit sweetness in the bouquet and palate and not so much of the herbaceous grassiness that may dominate in this variety.  Having made singular wines from this grape in New Zealand, he learned that much of the overblown headiness in those classic Marlborough blockbusters tends to fade in a year or two, he chooses a brighter, more restrained fermentation, which develops an undercurrent of citrus and gooseberry flavors.

Maison Nicolas Idiart Sancerre, 2013, around $28:  Sancerre—a village in Loire’s eastern half and opposite Pouilly-Fumé along the river—is home to one of the world’s classic interpretations of sauvignon blanc.  Idiart refers to his as ‘porcelain-like’ and I can find no better descriptor.  Planted on dry, chalky caillote, the wine is both delicate and full; pristine with clear notes of lemon, a slightly smokiness and a grapefruit rind in the lengthy finish.  There’s not a trace of oxidation, (to which the grape juice is susceptible) and which sometimes makes these wines (from lesser producers) take on notes of canned peas; rather, the clarity and precision of purpose is astonishing.

Maison Nicolas Idiart Pinot Noir, 2013, around $14:  If you’ve got fourteen bucks to spend on pinot noir and choose to spend it on some thin, mass-produced, bitter pinot that is—more than likely—25% not pinot noir, the inmates have already taken over the asylum.  Idiart’s pinot is light and wonderfully refreshing, showing all the nuanced angles of a decent Burgundy—black cherries, earth and an intriguing meatiness—if none of the brooding depth.  It’s a wine that calls out for seafood; ideally, fresh Loire River eel stewed in red wine—the local favorite called Matelote d’Anguilles.