Call me a good-ol’-boy, a peckerwood throwback, a retro-Aryan Nation dingaling—but in Detroit, my favorite African American wine pro in is a white dude.

Born into to a family of North African spice merchants, Elie Boudt cut his vending teeth early: By thirteen, his father had established him in a remote Libyan outpost without electricity or running water where he  waited for the weekly Friday market, sought out the best harrarat, bzaar, cayenne pepper or whatever the nomadic spice sellers had on hand, then sent them back to the family store in Morocco.  When college-time came, his folks wanted him to study in America, and they agreed that Kalamazoo College not only offered a marvelous program for exchange students, but espoused the sort of Midwestern hard-work ethics that the Boudt family stood by.  Elie came to America to study medicine but stayed—via as series of fortuitous encounters with Michigan retailers, including the legendary Brothers Jonna—to study wine. 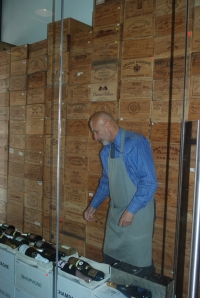 Elie keeps all Champagne a minimum of one year prior to sale. And yeah, he asks for disgorgement dates

Ask No Questions, Hear No Elies

I’ve known Elie for twenty years, and his relationship with wine is unique—a different sort of devotion than nestles inside any of the other wine people I’ve known for twenty years.  It’s more than love, deeper than intellect, stronger than passion, although all of these hyperbolic emotions play their role.  Elie approaches wine like a Science Fair poindexter might a cool bug inside a jar—with none of the cruelty, of course, but with all of the unbridled, child-like, gut-level awe.

B’ham Parking and dual entrances: A sure sign that you’ve arrived.

In June, he opened Elie Wine Co. on 14 Mile in Birmingham, an expanded version of Elie Wine Co. in Royal Oak, which has closed.  Closed because there couldn’t be two Elies, and hence, there couldn’t be two wine stores.  Elie is not merely the pilot of his establishment; he’s the diva (he won’t admit it), and if he’s not center stage, walking you through obscure, tiny Denominación de Origen gems with case production in the hundreds, or explaining to you why 1982 Petrus is worth six grand (whether you intend to brown bag today or not)—the shop is La Travieta without the brindisi. 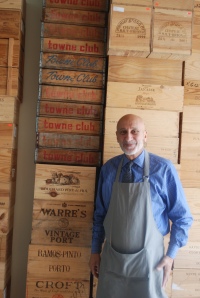 The Towne Club case is worth more than the Haut Brion case.

Elie specializes in wines from Burgundy, Bordeaux and Spain, and he buys stock almost exclusively from vintages that reflect the best that a given appellation can offer. Wander the aisles and you’ll see a boatload of 2005 Côte de Nuits and 2000 Médocs; 2007s, not so much.  As a result, although Elie carries a few wine with price tags sub-$20, three digits are far more common.

“I bring in what needs to be brought in,” Elie states emphatically. “These wines are an editorial statement as much as an aesthetic statement.  They represent what a given producer is capable of when all stars align.”

When asked if his customers are necessarily looking for two hundred dollar wines when they step across his threshold, he responds with a grin—sly homage to his salesmanship—“Not always, but that’s what they buy.”

Elie Through His Teeth

Elie moves about his two-thousand-square-foot store with pride and animation, somewhat hunched over, clapping his hands enthusiastically as we pass a particularly selection that he wants me to note—or better yet, to try.  He reminds me of a Dickensian bookseller in Piccadilly, gently presenting rare, antique, first-edition masterpieces.  In that regard, he comes across as much a museum curator as a wine seller.

But that’s not to say that his wines are mummies—far from it.  “The ideal wine cellar,” he says, “whether in a retail outlet or in your basement, is alive.  I don’t want any bones in my collection.  Vintages change, wines should move, and if I have more Burgundies this year, I might have more Bordeaux next.  Or maybe Italian—I don’t currently stock Italian wines, but I’m not suicidal.  If there’s a demand for it, I will carry it, but with the same search for harmony and balance in choosing the right wines for the store. The wines I sell have to reflect the essence of their place—they are a passport, if you will.  Some are pricey, I know.  But if you want to really learn what Pauillac can offer, the commune’s narrative, you’ll probably wind up spending a minimum of $60 for a bottle.”

(On the other hand, that’s Bordeaux, not Lodi. If your bucket list includes seeing Tibet, the plane ticket will cost more than a ticket to Chicago.   But I digress).

Window dressers aside, whenever I get a chance to tap into Elie’s expertise, I like to taste wines that rep a specific interest of mine—and his—indigenous varieties, the older and more esoteric the better.  And best of all, unusual grapes produced by tiny producers.

As such, Elie laid out an impressive array, which I will cover in brief:

Alemany i Corrio, Principia Mathematica, 2012, around $35, from Penedès, is produced by hubbie and wife enologists Irene Alemany and Laurent Corrió in a winery no bigger in size—literally—than Elie Wine Co.’s floorspace.  They specialize in merlot, cabernet sauvignon and cariñera, but this one is made with 100% xarel-lo, a variety traditionally used in cava.  Here vinified still and dry, the grape produces an intensely aromatic, mouth-coating wine filled with tropical fruit notes, especially pineapple and lychee.  A delighful, summer-sapid wine.

Pirita Blanco, Arribes, 2012, about $25, from a new D.O. (2007), Arribes, on the Spanish border with Portugal.  Unusual not only for the varietals, the appellation and the fact that the vineyard literally shimmers with pyrite—fool’s gold—the wine is made by an Englishwoman called Charlotte Allen.  A blend of three local grapes, puesta en cruz, malvasia and godello, the wine is lyrically light, peach-flavored, firmly acidic and very slightly oxidized—not a flaw when offered in judicious doses as it is here.

Pésico, Nicolas Marcos, 2011, about $39:   Carrasquín, mencía, verdejo tinto and albarín tinto make a crisp, ink-black blend from Asturia; a wild wine filled with rugged woodsy flavors of blackberry and currant, countrified, indeed, but the opulence that crowns it transforms it into the Oberon of coastal Spanish wines. 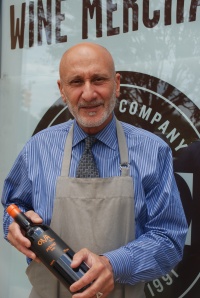 Ona,  Priorat, 2011, around $20: Elie has a perfectly delightful and beautiful wife called Núria Garrote i Esteve and a five-year-old daughter Ona—who’d tasted better wine by the time she was twenty-one minutes old than most people do in their entire, miserable, wine-challenged lives.  That’s because (with baby doc’s blessing), Elie touched her lips with gauze dipped in ’98 Haut Brion as soon as she left the birthing-room table, thus making her the first baby in history to get an Apgar score of 300.

And now she has a wine named after her and you don’t.  Ona, from Cellar Cecilio’s winemaker Blai Ferré Just, is a warm-bath blend of typical Spanish grapes with atypical Catalonian spellings; garnatxa and carinyena.  I doubt there’s any Haut Brion leftovers from her twenty-one-minute-old splurge, but—although only 180 cases of Ona were made—I have high hopes that a bottle will remain to touch Ona’s lips when hits her twenty-first birthday.

Meanwhile, scarcely twenty-one minutes into his new digs, Elie is reeling in global praise. Bertrand Devillard, proprietor of Château de Chamirey in Mercurey and Domaine des Perdrix in Nuits-Saint-Georges, refers to it as, “The most innovative wine store I’ve ever seen and the best Burgundy collection in the United States.”

One of the issues facing Elie is that these kudos came from a European, not a Detroitopean.  I would assume that such estate wines and specifically prized vintages could be found fairly easily in San Francisco or Manhattan, and certainly in Paris, but here in the Paris of the Midwest—along with the wellspring of scholarship that is Elie Boudt—such outlets are scarce as chin hair on a choir boy.  As a result, Elie expresses a bit of frustration that so many of his customers are out-of-staters.  To illustrate the point, in the hour I spent perusing and palaverating and partaking, a NFL scout from an East Coast team (whose name I promised I wouldn’t give) dropped in, dropped over and dropped a couple grand on a cellar cache.

Being my usual puerile cheap-laugh self, I opened with a little white Elie—there are plenty of African American wine pros in Detroit that I admire, including Chuck Jackson Jr. and Dichondra Johnson and the whole Mahogany Tasters gang (who I probably owe another column to and you need to check out)—but in the meantime, within the treasure trove of local wine lore, institutions like Elie Wine Co. must be put on a pedestal, flooded with custom and protected like that naked dude in front of the DIA.