Join The N.R.A. And Get A Free Ticket To The Vegan Expo

Well, not quite.  But close.  Yesterday, in the same spirit that rubba-neckin’ Bubba McCan-Koozie goes apeshit when NASCAR cars crash, I represented the Anti-Press at the annual Vegan Tastefest in Novi.

Over the years, among my fellow bleeding-heart liberals, I have been a lone voice in the wilderness, not only decrying veganism but actually collecting liberal heart-blood and passing out 1 oz. samples at vegan events throughout the Midwest.  I have marketed biodynamic, low-fat puppy burgers; I have interviewed members of other omnivorous species like birds and hedgehogs to see if they ever refuse to eat meat on moral grounds; I have installed clandestine surveillance equipment at PETA barbecues and filmed righteous vegans swatting mosquitoes; I have dressed up like Temple Grandin at the annual Lesbian, Gay, Bisexual, Transgender and Vegan Parade using mascara that was tested on preschoolers.

To Vegans, I Am Punishment Both Cruel and Unusual

Live and let live, I say—up to, but not including, peckishness.  Is there anything that sticks in the craw more than a smug, vocal catechumen of any marginalizing lifestyle that not only is virtually impossible to maintain with any degree of integrity, but which is also based on theoretics filled with more holes than Bonnie, Clyde or their Ford V8?

And you know I’m in good company here, don’t you?  The only time that Jesus got righteously pissed-off was when he was cleansing the synagogue of hypocrites.

And speaking of Jesus, vegans: Considering that the Dude from Galilee not only ate fish, but actually conjured them up out of thin air to feed his followers, at what point do you feel a little weird placing yourself on a higher moral plateau than God?

So, Here’s The Thing…

Correct me if I’m wrong:  The core philosophy of ‘veganism’ is not about diet; it is an all-encompassing world-view that supports the reduction of animals suffering and exploitation of sentient beings including insects—which is why silk (exploits worms) and honey (exploits bees) are no-nos.  Now, I could pick such a Mission Statement apart until the cows come home, but vegans everywhere would immediately argue that my points are moo (t) because having cows who need to come home exploits cattle.  And when I point out that a lot more bugs are inconvenienced every time a new soybean field is planted, let along the number of soybean weevils slaughtered when the field is treated with cholesterol-free, low-fat pesticides, they will shrug and admit that they are not ‘perfect’ and that this is still better than raising soybeans for animal feed, which is essentially ‘killing twice’—first, the weevils and then the cows who, as Thomas Wolfe warned, can’t go home again. 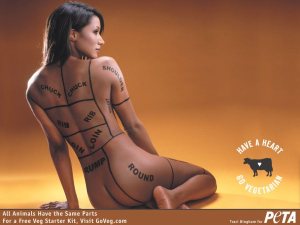 Yeah? How hard is to extrapolate from there that the true mission of every vegan should not be to ask the waiter if the wine is fined using bentonite instead of fish bladders, not to seek out flax bars that include no edible eggs in their inedible recipes, not to pleasure one’s self while looking at a nude poster of Traci Bingham painted up like butcher fodder, but instead to eradicate all predatory carnivores from the face of the earth?

Hungry meat-eaters cause far more suffering among earth’s innocent wildlife than they offset; thus, killing them once eliminates the callous murder of all organisms that would otherwise become their prey.

Get on it, vegans.  KillFest 2014.  Start with Fido and the neighbor’s enslaved Himalayan cat.  Either that, or—God forbid—your vague Rainbow Bright-like goal of ‘lessening suffering among sentient species’ is pretty much gluten-free hot air. 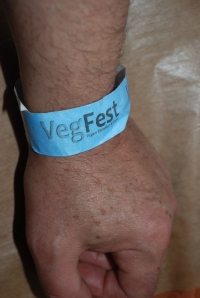 At this time of year, when vegans come out of a genetically-induced hibernation caused by the lack of a winter supply of organic, local, sustainable Whole Foods fruit, they appear to be as lean and hungry as Iago, minus the honesty and macho.  In fact, vegans on the whole do not strike me as the floor model for Emily Brontë’s lauded simile, ‘Her bright cheek, as soft and pure in its bloom as a wild rose’; rather, in general, they seem wan, thin and haunted-looking.  But that’s fine—I have always had a thing for wispy, nerdy, insubstantial girls with Daddy issues; they are not nearly as intimidating as strapping, self-confident, sausage-fed Jungfrau cheerleaders.  So, in that regard, VegFest was like the all-you-can-eat buffet at Sweden House, except without the people food.

And the Fest offered plenty of deer-in-the-headlight types in pleather leggings, armpit hair peeking out from Patagonia Island hemp tank tops like April crocuses; there were relapsed hippies so militantly anti-meat-consumption that they don’t even bite their nails; there were older, well-dressed skeletors intent on staving off the unstaveoffable, and prominently, there was one exception to prove the rule: An obese person who had perhaps had made a recent, unscheduled stop at Coronaryopolis and was now trying to get back on board the train.

See, there are two kinds of people you generally don’t see at vegan expositions: Fat people and black people.  This is not to say that there are not plenty of health-conscious African Americans who have sort of let themselves go, size-wise, but as far as I can tell, overall, veganism is pretty much a skinny honky phenomenon.

So, at the Expo, what was the object of the affection that turned their complexion from white to Walking Dead? 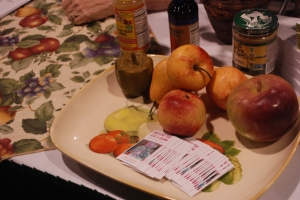 Irony-fortified wax fruit on display at Eat Like You Give A Damn.

Such crowd-pleasers as Sarah’s Falafel, devoid of corn, milk, eggs, MSG, soy or nuts and other stuff that nobody associates with these deep-fried Lebanese ratballs in the first place.  There was a Vdalish booth selling strange, upscale vegan ice cream made from ingredients unknown, although we sleep blissfully knowing that no cows were milked in the making of the product.   And Max’s Granola, which is actually quite good, and has a backstory so touching and sad that I urge you to research it and buy some—I’d fill in the poignant details, but I am right in the middle of being a smart ass, thank you very much.

I titled this tome with an allusion to gun nuts, which if they were food, would technically be on a vegan’s menu.   But in 2014,  are there two more archetypally divisive cults than tree-stand hunters and tree-hugging vegans?  Unless it is militant Pro-Life Christians and that restaurant in Lower Manhattan that uses aborted fetuses as pizza topping, I’d say not. 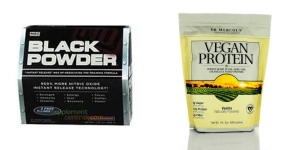 Holsters vs. holistics, cordite vs. Vegemite, combustion vs. compassion, MRI Black Powder vs. Mercola Protein Powder—if it comes to blows, the smart money, of course, is on the boys with the AK 47s.  But what in the world were the owners of Suburban Collection Showplace thinking when they booked the Michigan Arms Collectors Exhibit into the hall directly next to VegFest 2014?

I see—it’s a profit game and they were thinking cash flow.  The same motivating factor that inspired the sponsors of VegFest to charge me ten dollars for a ticket to wander around gawking and stalking and squawking smack among the assholier-than-thou.

And yes, there was an N.R.A. booth set up between the two events, with Cracker McBeavertail—a semi-literate, semi-automatic-owning semi driver—advertising ‘free admission’ if you were willing to commit to a year’s paid membership to the National Rifle Association.  When I asked him if my free ticket would also cover VegFest 2014, he looked at me as if it was moi, not hoi, who was batshit insane:

“You think if a dude’s wife makes him go to a vegetarian festival she’s gonna let him buy a gun??!”

True dat, Sir Douchalot, which is why I have a love/hate relationship with both of these flake-fringe factions.  Although, as the vegans confess, I too am an inherently imperfect creature who admits membership in some crackpot cults of my own, including the one that believes in capital punishment, but only if the bodies of the executed are used for food.

This entry was posted in GENERAL and tagged vegan hypocrisy. Bookmark the permalink.

3 Responses to Join The N.R.A. And Get A Free Ticket To The Vegan Expo