French To Take Some Canned Heat at Vinexpo 2013

We can jump in the water,

Stay drunk all the time.

Next week at Vinexpo in Bordeaux, Winestar will introduce a line of canned wine from Le Château de l’Ille in the AOC Corbières.  Quoting directly from ‘L.A. Times: Daily Dish—The Inside Scoop on Food in Los Angeles’:

‘Will Winestar’s single-serving cans create a riot in the hallowed halls of the international wine and spirits fair?  Maybe not.

The piece was written by columnist Irene Virbila, who is not only the most physically repulsive food writer since Marcus Gavius ‘The Hounds Chewed My Nose Off’ Apicius in 1 AD, but a complete and utter hosbian hagatha to boot—so mean-spirited that restrauteurs like Noah Ellis of the recently opened Red Medicine in Beverly Hills, refuse to serve her.

I would assume that Francis Ford and Sofia Coppola—who I wrote about earlier this week—agree with this overall assessment of assinity, and I’m sure that Barokes Wines of Australia does. The latter trademarked Vinsafe™, a system which allows premium wine to be canned with stability, although it is still Not Vinsafe™ For Work: Barokes’ canned Cabernet Shiraz Merlot (Bin 121) took a platinum medal at last year’s Consumer Wine Awards in Lodi, CA, while Coppola’s canned, sparkling Sofia Blanc de Blancs received 90 points from Wilfred Wong who is always right—despite being always wong.

If old butterface scuffin-muffin, brains-of-a-puffin believes these wines are ‘generic swill’, she’s stuck a fork in her already questionably credibootie once and for all.

That may be the case, Céd, but you know which other creators think their creations are classy?

The difference?  A twenty-four-pack of Winestar cost $78, and you could probably book Frank Stallone for half that.

Segal’s professed goal is to target young people who have stopped taking wine on picnics, or when they travel or during marathon bath salts sessions, claiming that he wants a a product that ‘gets away from the bad reputation of boxed wine’—although, ironically, bag-in-the-boxes like R. Müller Riesling and Pepperwood Grove Old Vine Zinfandel are far further along the ‘classy’ trail than tinned, low-alcohol Aventura Strawberry Moscato—Spirit Airlines spiritless spirit specialty.

Another irony?  Cédric would like his Winestar cans to become the Nespresso of Wine, saying, “What Nespresso did for the coffee market with single servings of high-quality coffee, we want to achieve for the wine market.”

I say ‘ironic’ because Nespresso—pre-apportioned, single-use capsules containing ground coffee and flavorings and requiring a product-specific, two hundred dollar Nespresso machine—has been around since 1976; it languished for years and years on the ‘who gives a shite’ marketing back-burner: Not my first choice for a business model.   That said, Nespresso is a good—even great product—especially for the novice caffeine addict without a bourgeois background in baristology, because it is very hard to screw up a homemade espresso if you follow Nesdirections.  But to me, the name draws to mind (and alas, palate) that genuinely awful coffee powder Nescafé, precursor to nearly-as-awful freeze-dried coffee ‘crystals’.

And indeed, both Nespresso and Nescafé are sons of the same father, the Nestlé Group of Lausanne, Switzerland.

But, that’s neither here nor there nor Tiananmen Square; it will all come down on June 16 – 30 in Booth KL41 at Vinexpo, where Cédric will set up shop to extol the virtues of plastic-lined aluminium (as the Canucks say) wine cans:

“We worked with Ball Packaging—among the world’s leaders in the manufacture of sealed packaging—to develop a can liner designed specifically for wine, impervious to oxygen or light. It preserves its quality without altering the taste and without oxidation’.

It is not clear how conventional, sealed, un-linered cans are pervious to oxygen and/or light, nor does it suggest how Winestar liners differ from the standard coating that nearly all aluminum cans already require in order to prevent the acids in low pH products (like wine) from degrading the metal.  But, more to the point, he will likely not discuss Bisphenol A, a plastic can liner additive that doubles as an endocrine disruptor which numerous studies have found to have negative health effects on humans; particularly, pregnant female humans.

But, That’s Neither Here Nor There Nor Intensive Care…

Of course, if you do manage to get a Winestar rep to discuss BPA, monsieur or madame will no doubt insist that the FDA has not established a significant health risk of Bisphenol A through exposure from aluminum cans.

To which you will reply: 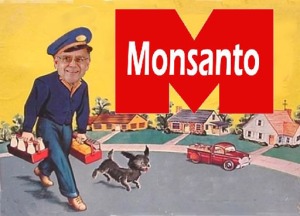 “Really!?  The same FDA who approved Monsanto’s genetically engineered cattle drug rBGH, which failed to gain approval in either Europe or Canada despite intense lobbying?

“The same FDA who an insider, in a White House ‘certified’ letter to President Obama, claims is riddled with politics, conflicts of interest and outright corruption, and is, as the letter says, ‘fundamentally broken’?

If that doesn’t doesn’t quell the quips and quotes, let me know—I’ll have the Vinexpo sound engineer cue the canned laughter.