As a fellow who (sans shame) looks stuff up on Wikipedia, then pretends he already knew it—or worse, made it up himself—I will hitherto explain the above, crackerjack scarehead:

A ‘hendiatris’ (from the Greek: ἓν διὰ τριῶν, hèn dià triôn, ‘one through three’) is a figure of speech used for emphasis, in which three words are used to express a single idea.

Not only did I already know that, but I also made it up.

However, as all but the most pinheaded, Binet Scale single-digiting, accidentally-Supergluing-hand-to-forehead among you have noted, I did not use the word ‘hendiatris’ in my skanky screamer, but ‘hempiatris’, which I guarantee that you will not find in Wikipedia, because indeed, I made that beeotch up.

We Will Sell No Wine Before We’re Done Serving Time 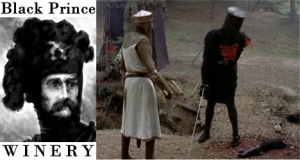 So, these Ontario oddballs—a descriptor which naturally could cover most of Canada—have come up with something they are hawking as Mary Jane’s Magical Hemp Wine, which the winemaker describes, in the biggest understatement since the Black Knight called his severed arm ‘a flesh wound’, as being ‘herbaceous’.

Speaking of the Black Knight—or in this case, the Black Prince—I confess to more than my usual benightedness over Mary Jane’s Magical Hemp Wine, a product of Black Prince Winery of Prince Edward County, Ontario, because I can find no real information on it.  Is it hemp infused grape wine?  Is it fermented pot juice?  Is it even legal here in the States if you have neither glaucoma nor cancer?  I could always call the winery of course, but I am not sure that this rural little municipality on the eastern end of Lake Ontario, just west of the St. Lawrence River, is even aware that such a thing as telephonic communication exists.  For sure, it is wine country—and happens to be Canada’s newest designated viticultural area.

But, perhaps the wave of the future is maricultural areas.  If I had one, I’d put in my parliamentary vote in favor of.  I do appreciate PR spokesman Scott Collier’s claim that the hemp is added ‘to round out and soften the acidity and tannins in the wine…’

Mary Jane Does a Hemp Vodka, Too

Well, see, this does make a little more sense, since herb-infused vodka has been around since those pixilated potato-poaching Poles invented it in the 8th century.  Back in the day, the most popular addition was buffalo grass, and the resulting beverage was called zubrówka.  Buffalo grass-infused vodka is still available, and is really pretty good.

So, if grass is grass is grass, hemp would be a logical extension of the principal.  Mary Jane Primo Hemp Vodka is produced in Kelowna, BC by Urban Distillery, who has this to say about it:

“Uh, I forgot the question. Again.”

Odd Spokesman for the Product? 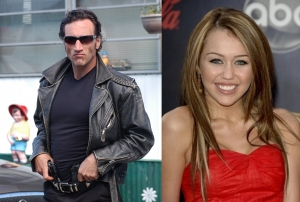 Cyrus and Cyrus, at your cervix.

Both the wine and the wódka are being fronted by the fictional character Cyrus from the Showcase series Trailer Park Boys.  Cyrus, played by Bernard Robichaud, is a high school dropout-cum-drug dealer who who enjoys waving his Beretta 92 around, terrorizing the residents of the trailer park.

If this is the face that Mary Jane wants to present for its products, that’s their business, of course.

But I guess I’m a bit lost at the concept of having a non-existent spokesperson who only about fifty people without Canadian accents have even heard of.  I mean, if the image you want to project to potential customers is one of hard-line, violent loserdom, why not canvass Ontario’s Kingston Pen, listed Number Three on David Wallechinsky’s 10 Toughest Prisons in North America (The Book of Lists)?  With its cramped cells, rats in the toilet, steel trays, tin cups and the silent system, I guarantee you could find a real live Kingston thug to pitch for you.

But these are wiser folks than I, and I suppose if I had to get simultaneously high and drunk every time I drank my own stuff whether or not I wanted to, such ideas might grow on me, too.

Biggest issue then would be remembering to write them down.