120 miles southwest of mainland Greece there is a wisp of an island upon which mighty things have happened, are happening, and—the Twelve Olympians willing—will continue to happen long after you and I are riding point during the zombie apocalypse.

Although its official name is Thira, most of the world has referred to it as ‘Santorini’ since the third century AD when Fourth Crusade snatched it the Byzantine Empire and re-named it in honor of  St. Irene—a non-Olympian for sure.

Stem to stern, Santorini is all of 35 square miles in size—roughly the same as Manhattan.  But unlike the Big Apple, whose population density is around 70,000 per square mile the Big Assyrtiko Grape spreads them a bit thinner at 400/ sq. mi., and the fifteen thousand people who call the Cycladean archipelago home boast a heritage that has survived earthquakes, volcanoes, droughts, pissed-off Christians and collapsing Minoan ruins, and are riding out the current Greek economic implosion with steeze and swagger.  Among the most popular tourist destinations on the planet (voted the world’s ‘best’ island by Travel + Leisure magazine in 2011) Santorini continues to float upon a cash-flow bubble while the rest of the country watches salaries and pensions fade into an Ionian sunset.

And one of the reason is Santorini’s unique, volcanic wine.

Wine has been a cultural backbone in Santorini for as long as history has been recorded, but it wasn’t until the Italians stuck their boot into the barrel that things began to heat up.  One of the Fourth Crusade’s leaders was a wealthy Venetian called Marco Sanudo, and he wound up in control of the Cyclades following the decision of the Holy Warriors to forego Jerusalem and sack Constantinople instead.  They did; they won; they took over the territorial portfolio.

Nephew of Venetian doge Enrico Dandolo, Sanudo was named first Duke of the Duchy of the Archipelago, and under his influence, the wines of Santorini began to be exported throughout the ancient world.

Like most of the world’s great wines, Santorini’s are the product of poor soil and a Mediterranean climate characterized by warm temperatures, low rainfall but high humidity during the growing season. During the Duke’s era, they proved to be unusually high in sugar and alcohol and as such  were particularly suited for long sea voyages.  So valued were they that, as Mick Jagger’s Start-Up girl could make a grown man cry and a dead man (intransitive verb meaning ‘to splooge’), Santorini’s wine could make a Muslim man millions—despite the Koran’s edict forbidding trading in alcohol.

Blaming the island’s lousy geography, which made other cash crops impractical, the Ottoman Turks—who captured the region in 1579—encouraged the wine industry, and in fact, when the Russian Orthodox Church made Santorini the official producer of Eucharistic wine, the Turks kept the pipeline flowing freely even though they were at war with Russia more years than not.

Three ancient varietals are Santorini’s workhorse grapes: The triple ‘A’ gang of assyrtiko, athiri and aidani has been producing quality white wine essentially since Santorini was created by Poseidon’s son Euphemus as a place to hide his pregnant girlfriend.  Although they can now be found planted throughout Greece, nowhere does the  trio produce wines of such depth and complexity—due mainly to the unique Cycladean terroir. *

* French etymology notwithstanding, the Greeks invented ‘terroir’ as a selling point by stamping amphorae with the seal of their region of origin; different regions soon established individual reputations based on quality.

Assyrtiko is the premiere white grape of Santorini, prized for its productivity and versatility.  Not only did it first find life in Santorini, it has reached heights in this barren, river-free, shield-volcano complex that far outstrip the quality of assyrtiko grown on the mainland.  This the result of the easy-draining ash that makes of up the island’s soil; it’s called ‘aspa’ and not only is it rich in trace minerals, but its porosity seems to make Santorini vineyards impervious to the old enological enemy phylloxera.  As a result, you’ll find no grafted rootstock on Santorini, and some of the assyrtiko vines have been producing wine for three centuries.  Over the course of time, assyrtiko has developed certain unique characteristics found only here; most notably, when grown amid the black pumice and clay-free sand, the grape displays an extraordinary ability to maintain a natural equilibrium between acid and sugar, even when fully ripe.  Equally, the fog that envelops the island during the night—a consequence of the active volcano and sea water—is absorbed by the soil and transferred to the vine roots, giving these wines an intriguing note of brine, making it a sublime match for local seafood dishes.

The lineage of athiri on Santorini may date back even further than assyrtiko; in fact, it is named for the island’s classical cognomen Thēra.  Vinified alone, athiri does not reach assyrtiko’s Olympian heights; it tends to work best as a blending grapes to temper the high acidity and alcohol of assyrtiko, especially in the production of vinsanto (about which more will be said directly).  It is in nearby Rhodes that the grape has found an ideal host habitat, and there it is used to produce not only a delicate, lemon-scented, highly-regarded single varietal wine, but Greece’s only Méthode Champenoise.

The last member of the Thira Three, aidani sports a profile somewhere between assyrtiko and athiri with moderate acidity and middling alcohol; it is also, often a component of vinsanto.   In blends, it lends aromatics to wines that might be otherwise light on the nose, especially the kind of floral scents associated with muscat (jasmine and honeysuckle) and the tropical fruit tones often seen in California chardonnay.

Vinsanto, on the other hand, has been the most widely celebrated and distributed of Santorini’s wines for thousands of years.  Don’t be guiled by the guidos—the Italians talk a good game when it comes to vinsanto, but any claim to them having invented it can be dispelled soon enough: Vinsanto is a contraction of ‘Vino di Santorini’.  Beside, in production methods, style and substance, both the Venetian version and the Tuscan translation are different beasts entirely.

For starters, Italians dry their chosen varietals—trebbiano and malvasia—on mats; indoors, in attics or under staircases, generally in darkness, while the Greeks spread their late-harvested assyrtiko (et al.) on hillsides outdoors and rely upon the benevolence of Apollo Helios to turn them into raisins—a much quicker process that gives vinsanto (as opposed to the two-word ‘vin santo’) its characteristic volatility.

Assyrtiko drying and St. Apollo, who dries them.

The Italian incarnation is dubbed ‘Holy Wine’ because it is produced exclusively in the week preceding Easter, and it may be as dry and oxidized as oloroso sherry.  Greek vinsanto is naturally sweet, although it is a bit disingenuous to label it ‘dessert wine’ since the pronounced acidity makes it suitable for most courses.

In 2002, EU legislation found that there was sufficient evidence to prove vinsanto’s Santorini provenance and ruled that this Greek island was the only appellation in Europe able to label its sweet, sun-dried wines as such.

The Italians would have to settle for ‘vin santo’ or ‘vino santo’ or pound sand down a bingo-bongo bung-hole.

A couple other concepts round out Santorini’s remarkable and venerable wine traditions: 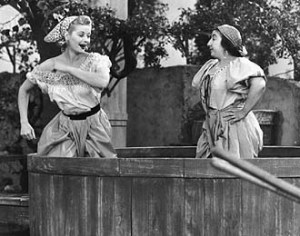 Mezzo, a less cloying version of vinsanto, is made from partially raisined assyrtiko grapes—and obviously, without the sugar stasis, the wine tends to be overtly acidic and not really a Western palate-pleaser.

Brousko may date from the island’s Venetian occupation, but it is suitably up-to-date with its color-blind view of the world—it can be red, white or pink.  The word ‘brousko’ refers to a method more than a specific wine: To produce it, local grapes are held in bins for several days, then crushed by hand, which means foot and fermented with skins, stems and seeds included.  Brousko has mostly fallen from grace on Santorini, where free-run juice is now nearly de rigueur, and although it can still be found in isolated pockets around the island, it is not exported.

(The following wines were sampled through the courtesy of a distinctly non-Hellenic cailín beag I met when I ran the ‘Guess Your Name’ booth at the State Fair.  I will say that she is so overwhelmingly Irish-looking that I instantly guessed ‘Jen O’Flanagan’ and, you know what?

She didn’t win the six-foot stuffed Scooby Doo.  I did.)

Hatzidakis Dry White, Santorini, 2010, about $20:  Surprisingly full-bodied, this blend of the tried ‘n’ true triumvirate (assyrtiko, athiri and aidani for those who have been nodding out) offers a full range of lemon and lime flavors rounded out with some chalky brine, unripe peach, honeysuckle and a vibrant, bracing bite of acidity.

Domaine Sigalas Assyrtiko, Santorini, 2011, around $20:  Sharp and shivery, the wine exhibits a nose that is predominately citrus—lemon peel in particular with whiffs of peach and pomelo.  Dryza-bone but with contrasting notes of honey and saltiness; a sensational mealtime bevvie (see recipe) with high-toned minerality and a bit of oak on the finish.

San Torini Vinsanto, Santorini, 2005, about $35 (500ml.):  Textbook vinsanto, only with so many footnotes and citations that you’ll spend a lot of wonderful time working out the coppery-red complexities.  There’s fig, espresso, kirsch and hazelnut in the nose, coffee and toffee mid-palate, everything drizzled with honey and lemon.  It would sit well with a caramel-based dessert, but I tried it with pumpkin soup and it proved to be a perfect pairing.

1. Bring a large pot of lightly salted water to a boil. Add pasta and cook for 8 to 10 minutes or until al dente; drain.

2. In a frying pan, melt butter over medium low heat; add wine, cheese, garlic, parsley and salt and pepper to taste. Simmer over low heat for 3 to 5 minutes, stirring frequently.

3. Increase heat to medium high and add prawns to pan; cook for 3 to 4 minutes or until prawns begins to turn pink. Do not overcook.

4. Divide pasta into portions and spoon sauce and prawns on top; garnish with Parmesan cheese and fresh parsley.