Celebrity Wine Is Truly The Pitts

Truth be told, my Intoxicology Report editors don’t like me—not one little bit.  They don’t like my literary style, my superiority complex or my cute Lucy Ball poodle do—in short, they don’t like the cut of my jib.  They are always telling me that their site is essentially a humor site, not a wine-education site, and that my columns are too scholarly, too filled with dull enological trivia and pedantic discussions of subjects like volatile sulfur compounds in wine—specifically, mercaptans (a.k.a., ‘thiol’).

They claim that whenever I try to ‘yuk it up’ with columns like Just Desserts (dessert wines, of course!) and Que Syrah, Syrah (you can figure that one out, silly!) my sense of hilarity comes across as sort of—in their words—‘forced’.

Hey!  Personally, I thought my jokes were pretty good.

Anyway, even though Intox Report was founded in 1909 by my great grandfather,  in order to keep my lucrative writing gig, I had to sign a new contract with blog lawyers stating that, for three weeks, six days of each month I could write about the multidimensional scalings that are used to quantify sensory data at wine tastings, direct causal connections between brain cancer and specific varietals and the physiological and evolutionary response of saccharomyces cerevisiae to challenging environments.

But for my sins, one day every month, Article Four, Section One states that I have to write about the subject I despise above all others:

Well, my brethren—today’s the day.

There is Nothing Cutesy, Nothing Clever, Nothing ‘Fun’ About the Term Brangelina… 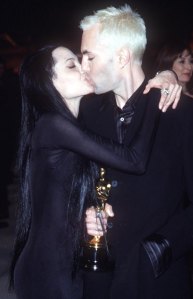 …Nor is there anything even vaguely endearing about this super-flaky ‘supercouple’, and certainly nothing amusing about them—not even the fact they they are peeps with Marc Perrin, fifth generation family winemaker at Château de Beaucastel in Châteauneuf-du-Pape.

I suppose it is more kooky than comical that rugged-yet-debonair Brad and bicycle-tire-lipped, daddy-dissing Angelina own a thousand acres of prime vineyard in Provence and certainly more than ironic considering that former mental-patient Jolie likes to ‘French’ kiss her older brother on national television.

One Humdinger Over the Line, Sweet Jésu…

However, because they are twisted, idiotic people, the Intoxicology Report board of directors find it hilarious that Brad and Angie have begun to adopt Provençal orphans, who have promptly murdered all their African children, just like the French did to the Algerians in 1957.

My uppity-ups wanted to make certain I mentioned this scandal in my column.  But I’m not going there.

Instead, I will maintain a laser focus on the topic at hand: Miraval, the Jolie/Pitt and Perrin rosé set for release in a few weeks.

The story behind Miraval is a metaphor for ‘the problem’—not only with celebrity wine, but with celebrities themselves.  As it goes, after having lived in sin on the estate since 2008, Brad and Angelina bought Château Miraval from American Tom Bove in 2012 after their lease expired, at a reported sale price of $60 million USD.  This may seem extravagant, but for Jésu’s sake, the place is surrounded by a moat; it has thirty-five rooms, a chapel and an immense wine cellar built in 1850 by the inventor of reinforced concrete.

Prior to the purchase, the property was known not so much for the wine, but for the estate’s onsite Studio Miraval where Pink Floyd recorded ‘The Wall’ in 1979.  In fact, the Miraval rosé bearing the Jolie/Pitt rubric was previously called ‘Pink Floyd’, and since French wine cognoscenti tend not to make purchases based on painful puns, the decision to change the name was probably a wise one.

The issue is that, other than ego, there is no conceivable reason why Brad and Angelina should be stamping their names on Miraval. 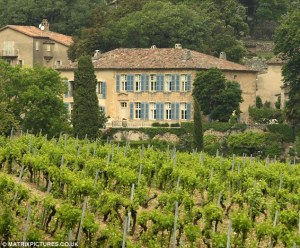 First, it really can’t be a money-making venture, so the big-gun Fight Club/ Lara Croft endorsement is not a financial shot-in-the-arm.  Bear with me through the math: Figure that the old-vine cinsault from which Miraval is made probably yields less than two tons per acre.  With 128 acres of vine, if it all went into rosé  (it doesn’t—there is a white and a couple of reds to follow), that equates to about 35,000 gallons of wine, or, 175,000 bottles.  Currently, ‘Pink Floyd’ sells for $20 per bottle, so, at the same price, we have a gross return of $3.5 million if nobody is looking for a case discount and if Jowly Pitt and Lippy Jolie are willing to hand-sell the wine from a fruit stand in front of the estate—otherwise, of course, the entire distribution chain, down to the lowly retailer, gets their pound of flesh.  And that $3.5 million figure is obviously pre-overhead fixed ‘n’ variable operating costs, including packaging, field labor, management, winemakers, clerical, cellar/receiving/refrigeration equipment, taxes and fees…

Et cetera.  I’m no accountant, but I can’t see Miraval finishing a fiscal cycle in the black any time soon.

Second, putting your name on a product you really had no genuine hands-on input in the creation of is just a trifle jerk-offish, don’t you think?  Like if the dipshit duo bought the copyright for The Wizard of Oz, and the next time you watched it, the titles read ‘Starring Brad Pitt and Angelina Jolie’.

How Much Input Did P/J Have in the Creation of Miraval?

So glad you asked.  According to the wine’s genuine architect, Marc Perrin: ‘They were present at the blending sessions…’

Poor, dear, star-struck Marc: So, by that rationale, if Brad were to invite you to visit him on the set of Inglourious Basterds II, you would expect to see your name up on the marquee.

Perrin goes on to say that, ‘The Jolie/Pitts want to ensure they are making the best Provence wines they can. They are re-looking at everything, from the installations in the winery—where we have already switched to stainless steel tanks—to reworking the labels across the range of wines.’

Well, he does make some points here, not all of them stellar.

‘They’ are making the best Provence wines they can, Monsieur?  Yeah, by not making it at all and letting you make it.  As for ‘switching’ to stainless steel,  what did you use before?  I mean, who barrel-ferments rosé?

I will concede on the label thing; as seen in the photo to the left, the artwork and bottle-shape are sensational.  Not sure what that has to do with wine quality, but it is a pleasant place to start.

Rumor has it—and I’m a total sucker for celebrity rumors, aren’t you?—that Brad and Angelina plan to serve Miraval at their upcoming nuptials, although nobody knows when, precisely, that will happen.  An imminent wedding is also said to be the reason for the ‘hyphenated Jolie-Pitt’ name on the Miraval label.  Further, their lawyer has announced a prenup agreement, the province of most megastar lovebirds.

But as to why they are bothering to get married at all, Encino attorney Goldie Schon, APLC gives us some much-needed insight.

(You are advised to hold on to your digestive tract before reading further, and it couldn’t hurt to have some Emetrol handy, just in case):

“The reason they are getting married is because of their children. Their children are growing up and they are becoming more knowledgeable of what mommies and daddies are supposed to be.”

Well, I am sure that the lesson will be of untold value to this poor, profitable, privileged progeny:  Mommies and daddies are supposed to be tabloid superheroes who want the world to believe that they are everything to everyone, and who have done so well amid the smoke-and-mirrors of Hollywood that they can sell photographs of you children for $14 million dollars then commission Madame Tussauds to do wax sculptures of you; mommies are supposed to list Resnick Neuropsychiatric Hospital as their alma mater, and are supposed to live with daddies in 35-room mansions with moats and chapels while making great gobs of wine in the cellar; and finally, mommies and daddies are supposed to wait until you kids start shaving or menstruating before they get married.

I know my folks are a lot like that.  At least, the wine in the cellar part.

5 Responses to Celebrity Wine Is Truly The Pitts