What’s Christmas All About, Stillman Brown?

‘Normative ethics’ is that branch of philosophy concerned with the practical means of determining a moral line of conduct in a given situation.  It is rooted in the Greek word ethos, meaning ‘character’, and is perhaps the single most socially significant word we have usurped from these randy old buggers since pedophilia.

Help Me, I Kant Decide…

I remain in an introspective mood this morning, and I am questioning the correct moral course of action for me to take, at Christmas time, in a specific for instance.  And I look upon you, my impartial, eager-to-assist plonk patrons, to offer an opinion:

Without naming names, let’s say I have a good buddy who makes wine for a living out in Paso Robles, and he sent me some samples to review at this, the holiest of seasons for excess drinking.  How do I handle it, ethically?  Do I rave about the wines simply for the sake of brotherhood, bonding and moral low-ground, or do I take the categorical imperative deduced by Kant—the ‘ought’ vs. the ‘is’—and say they suck the mega-male-member?

Ha ha ha ha ha!  Just kidding, I loved the wines.  I just wanted to see if I could make the needle on Stillman Brown’s turntable skip.

Anyway, if you have ever known someone with moderate autism, and potentially even married her/him, one of the inexplicable but endearing things about them is their recurring, obsessive thoughts and compulsive actions.  Like, when I was growing up there was an autistic kid in the neighborhood that learned every tiny detail about Detroit’s elevated light-rail system, the People Mover, and was actually arrested several times for joy-riding on it.  Another kid, the brother of a friend, had a thing about license plates—he could remember every one he ever saw, including mine—but needed help going to the bathroom.

Now, I am not suggesting that Stillman Brown is autistic—not at all.  Nor am I saying that his somatic obsessions and repetitious rituals are the result of psychosis and/or substance abuse.

I might be thinking it, but I’m not saying it. 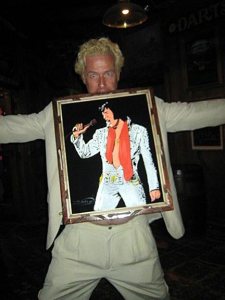 Nonetheless, something has to explain his morbid fixation with zeppelins and Elvis Presley.  It is textbook OCD, and I understand this without need for a structured diagnostic interview.  They appear in all aspects of his life, personal, public and professional, over and over and over…

Of course, a polite person and concerned friend does not ask the private meaning of these esoteric symbols and why they have so cornered him; I suppose it would be like asking Rain Man why he watches People’s Court.  But, they are clearly intrusive, distressing and time-consuming issues, and yet something he does not appear able to control.

Let’s look at some examples:

First, he seems driven to name all his wines after zeppelins—no surprise, but still…  WTF?  There’s Black Zeppelin, Pink Zeppelin, Red Zeppelin, and if he was able to ferment bell peppers, I’m sure there would be a Green Zeppelin.

Go to http://www.redzeppelinwinery.com/ and do your best to view it with the perspective of neurodiversity.

As a first-timer, you will naturally go first to the tab that reads ‘About’, since you are curious as to where all this autistic-spectrum repetitive phenomenology is coming from.  There you will find, in Stillman’s own company summation, the use of the word ‘zeppelin’ six individual times in two short paragraph.  (To be totally honest, I have a touch of OCD myself and have to count the ‘zeppelins’ nine times, walk in nine circles, then count them over again).

Go to the immediate right on that same page, and you’ll find—for sale—a poster called ‘Elvis Died For Your Sins’, of which the following delusional claim is made:  ‘Steeped in Elvis history, lore and truthfulness’.  The image appears to be the product of an extremely severe LSD flashback, painted by an artist who inherited all of the insanity of the masters Van Gogh, Munch and Dali, and none of their skill sets.

Moving on, we explore the FAQs tab, and find that someone had the masochistic audacity to wonder where the name Red Zeppelin came from,  to which Mr. Brown responds with a disintegrative, Aspergerish history lesson about the role zeppelins have played in European theaters of war.  I will guarantee you that neither Robert Plant nor Jimmy Page know—or care—this much about zeppelins, and they’re Europeans.

Finally, like those Faces of Death flicks, if you are so mesmerized by this OCD winemaker that you want more, you are invited to access his personal web page at http://www.stillmanbrown.blogspot.com/  That’s when you will begin your decent into the true abyss of mental-mutation madness.  It is all frenzied zeppelins and horrible Elvis impersonators; they fly at you like bats in a 60’s 3-D horror flick.

Speaking of which, despite my interest, respect—even love for Stillman Brown—I must say that he is to California winemaking what the egg lady is to Pink Flamingos. 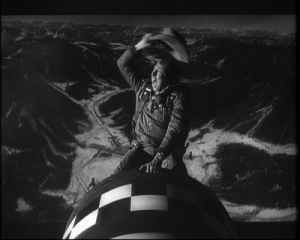 He does turn out a hell of a good fermented product, though—somehow, some way—and with the holidays around the corner, I recommend that you do your best to ignore the psychopathy behind the winemaker and buy for the pedigree of his winemaking skills.

And since Stillman likes it if you call personally at 805-550-6492 to order your wine (the human touch is good therapy), please remember to complement him on his unique Christmas card this year, which portrays him in full Elvis regalia riding a crashing zeppelin like Slim Pickens did the Doomsday bomb.  Beneath the image is Stillman’s short list for Santa Claus:

‘All I want for Christmas are my two frontal lobes’.  * 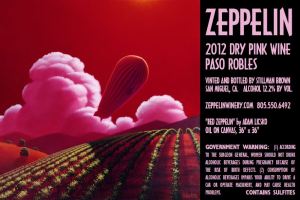 Zeppelin Winery, ‘Dry Pink Wine’, Paso Robles, 2012, about $20: 2011 ‘Dry Pink’, as covered in a March column, was grenache-based; this vintage winds up only 12% grenache with the volume made up by syrah (42%), mourvedre (38%) and cinsault (9%).  And apparently it is just as well, since Stillman’s tasting notes refer to grenache-heavy Côtes du Rhône rosé as ethereal, flowery… and wimpy.  His version is decidedly not wimpy, with great gams and plenty of oomph and color extraction to rival some pinot noirs.  The flavors are robust as well, with pungent red berry and cherry on the nose followed by a fleshy, chewy, refreshing palate filled with orange rind, strawberry jam, a little smoke and a racy, clean finish.

Zeppelin Winery, Chateau d’Abalone Verdejo, Paso Robles, 2012, about  $25:  The first verdejo released in San Luis Obispo County, the wine is a crisp tribute to Rueda, Spain.  Once used to make rich, sherry-like, Stillman Brown-colored fortified wine, if handled correctly (and not allowed to oxidize) verdejo can produce a vibrant, citrusy, fresh-tasting table wine—and in the case, does.  Brown wisely blends his verdejo with  sauvignon blanc—a grape with a similar profile and a natural affinity, but a bit more volume.  The wine shows an array of stone fruits, green apple, grapefruit and herbs balanced by a crisp, refreshing acidity and a nice dose of minerality.

The Mask of Sanity

Zeppelin Winery, ‘Colossus’ Syrah, Paso Robles, 2011, around $50:  A booty-booting 16.5% alcohol, this blockbuster syrah from Gill Vineyard is worthy of its name and label.  2010 saw Brown harvest two tons per acre; 2011, only a single, concentrated ton equating to a mere 53 cases of wine.  What exists in inky intrigue is beautifully rich and laced with blackberry, allspice, white pepper, sweet dark cherries and an oaken, vanilla core along with subtle tones of earth and game.  Long, long, long on the palate.

* Special thanks to the American Psychiatric Association and C.J. McDougle (Repetitive Thoughts and Behavior in Pervasive Developmental Disorders; 2000) for their  help in composing this wine review.

2 Responses to What’s Christmas All About, Stillman Brown?