The other day I read an interesting statement made by my colleague Robert Whitley of Whitley on Wine. 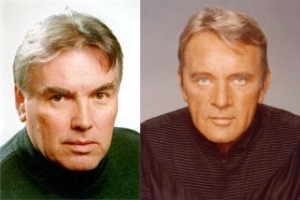 And, so we’re clear, by ‘colleague’ I mean ‘someone who writes about wine like me, but actually takes it seriously’.  Seriousity is an admirable trait that requires extensive knowledge of the subject and the ability to maintain a public face of decorum at tastings, winemaker dinners, competitions and speaking engagements.

Whitley actually does his homework, too, finding all sorts of cool value wines that you might have overlooked, then renders them real in graphic, poetic, gustatory tasting note terms; like Villa Maria Sauvignon Blanc from Marlborough (‘…aromas of ripe gooseberry and pungent grapefruit…’) and Royal Tokaji Furmint from Hungary (‘…nuances of brioche, honey, and wet stone complemented by fruit-driven aromas of citrus and green apple…’)

The dude even looks serious—like Richard Burton, although ironically, sober.

Me, I tend to fake my way through the written part and get sloppy silly plastered during the public part; I research not wines, but distributors, because I need a steady supply of ‘review samples’, and generally, once a rep and/or associated winery actually reads what I write about what they’ve sent, said rep is either fired or pretends it was all a big misunderstanding.  That is likely because when I compile my ‘Tasting Notes’, I simply shake my Magic 8-Ball and use some variant of whatever comes up in the little window.

And as for looks?  I may not be worth a date with Liz Taylor, but I can give Whoopee Goldberg a run for her money.

BTW, I got my job through Affirmation Action.  Thank you, white people.

So again, when it comes to Robert Whitley, ‘colleague’ may be defined in the loosest terms possible since it contains the word ‘league’ and I am certainly not in his.

At all events, the statement that Whitley made that so inspired me was this:

‘I sense a trend. Seems everyone (including me) is writing about good value wines for the holidays.’

Well, about that:  For all my amateurish, self-obsessed, ill-conceived columnizing, which tends to view the wine world not so much as a specimen beneath a microscope, but as the fat chick on the carnival midway sitting above the Super Soaker dunk tank, I have scrupulously avoided following trends.  Like, when critics started raving about Mendoza malbec, I was doing blogs on really cheap Argentinian vino de mesa made with criollo chica and Granadero Baigorria antifreeze.  I used to like muscat, but now that every gangsta-rapper wanna-be from Bed-Stuy to Oakland is slamming the shit for breakfast, I’m touting muskrat wine from Turkmenistan. And when the conversation turns to ‘trendy blendies’ like sauvignon blanc and grechetto, merlot and garnacha, gewurtz and pinot gris, I’m all about a Fred Sanford blend of chardonnay and Ripple to make me some chardonipple.

In fact, the more I think about it, the more impressed I become with my own iconoclastic worldview and think-on-my-feet, image-busting creativity.

If you held my toes to the bunsen burner and forced me to tell you of my proudest accomplishment when I lived on the street, it would be convincing Night Train to release a Special Edition Night Train Single Vineyard Express Reserve, which I then got the Michigan Re-Education Foundation to subsidize as a way to transform homeless drug-addicted cretins into wage-earning employees of the wine industry.

And you know that top-shelf, high-end label ‘Pruno Località Liquoroso’ made with baker’s yeast and Harrod’s Premium Fruit Cocktail juice that everybody’s talking about?  Mine—conceived when I did a brief stint at Detroit House of Corrections.

In fact, when you get down to brass tacks, this particular brand has made me such a steaming heap of cash that I really don’t need to follow Whitley’s ‘trend’ anyway.

Screw my middle-class readers: You want to drink like some ghetto swill-sucking schmuck without two nickels to rub together, read Whitley—or whichever trend-junkie lines up with him.

Me, I’ll make a holiday list for those of us with sufficient scoot to appreciate the real deal.

I will, however, do my best to describe these wines using flowery, detailed, overblown Whitleyan, Parkerish—even Karen MacNeilistic terminology since these are some of the greatest wines ever produced in the history of humanity, and as such, they deserve this sort of respectful treatment:  After all, It isn’t every day that you can afford a $10,000 bottle of wine.

Worth it?  Probably not.

You may rely on it.

This entry was posted in GENERAL and tagged 2012, wines for Christmas. Bookmark the permalink.