Hittite Me With Your Best Shot, Turkey

According to Robert McIntosh, owner of the trendy European wine marketing agency Vrazon, we owe a debt of gratitude to the Hittites for the very existence of wine.

And I intend to thank them.

In person, of course, because texting one’s lifelong gratitude to a Bronze Age Anatolian is not only maximum crass, but hittite-and-miss with the spotty Turkcell service in the Kaçkar Mountains.  By the way, no crap about the potential ‘non-existence’ of mobile phones in 2000 BC—any race that could invent wine should have had no problem with a couple of Smartphone microchips and a bunch of silly little circuits.

But before I yank on my bashlyk and saddle up my Akhal-Teke and head out into the Turkish sunrise, a word on those Hittites and why McIntosh figures we owe them Prosecco props and Dolcetto daps:

It turns out that Vitis vinifera, the source of most of the world’s wine, had its origins in northeast Turkey, near the Black Sea.  When the Hittites rolled into town around the 18th century BC, they found such an abundance of vinifera vines that not only did wine become central to their economy, but they named the new land ‘Wiana’, meaning vineyards.

Wiana, in fact, is where our word ‘wine’ comes from—so at the very least, McIntosh scores etymology points for calling in our debt to the Hittites for the existence of ‘wine’.

If you were force-fed Gilgamesh in school, you may recall the following stanza from that interminably convoluted Sumerian snooze-fest even if you nodded out almost instantly—it appears on the very first page:

‘But Gilgamesh, hearing the sound of the bolt,
Threw up his head and lodged his foot in the gate;
He called to her, ‘Young woman, maker of wine,
Why do you bolt your door?’

One such bout of valor was undertaken by Gilgamesh’s mentor in immortality, Utnapishtim, who relates a story in which the god Ea warns him of an impending flood and commands him to build a massive boat in which to preserve ‘all living things’.  Utnapishtim obeys, and following the flood, with his boat lodged on a mountain, he finds that everyone else on earth is dead.

Noah Moah For Me, Thanks

Every simpering Sunday school sap or kid cursed with a Christian pre-school education knows that God told Noah to build an arky, arky and to make it out of gopher barky, barky; the animals came in by twosies, twosies, including elephants and kangaroosies, roosies.

What they don’t know—and what most adults don’t know either—is that as soon as the sun dried up the landy, landy and everything was fine and dandy, dandy, the very first thing Noah did was to plant a vineyard.

And everything would have been hunky dory, dory, too—except that’s not the end of the story, story:

21. And Noah drank of the wine, and was drunken; and he was uncovered within his tent.

22. And Ham saw the nakedness of his father, and told his two brethren without.

Yo, Noah gots fucked-up an’ sho nuff crunked out in his birfday suit;  homies like Ham-Dog try ta cover him up widout peepin his johnson, know what ah’m sayin?

The pickle-bender did not seem to have left Noah any worse for the wear, however: He survived another 350 years, dying at the laudable age of 950.

Noah, of course, is an apocryphal figure—nobody lives to be 950 except Larry King and Hugh Hefner.  Ironically, Gilgamesh was a real person, the Sumerian King of Uruk, c. 2600 BC, although the claim that he was two-thirds god and also a giant may be a bit hyperbolic.  I mean, it’s not like we’re talking about LeBron James, is it?

Either way, Mt. Ararat—the supposed clog-site of Noah’s Ark—is a real mountain in eastern Turkey, smack dab in the middle of Anatolia.  Therefore, since nothing in the Bible suggests that Noah suffered any wanderlust after debarking, we must assume that the pixilated, pecker-parading Patriarch was flashing his six hundred year old assets  to hellabitchin Hittites as well as Ham.

And with a hangover the size of Hagia Sophia?

I’m sure that Ark-boy was not yet ready to thank them for the existence of wine.

‘Make it a double, numb nuts.  And quick!

Well, considering that animals are known to knock the odd one back with the help of naturally-fermented fruit—notably Swedish moose, who go for late-harvest apples, fruit bats who have access to any number of botanical bars, rhesus macaques who drink until their blood alcohol reaches .08% (the legal limit in most states) and of course, the Monarch of Marinated Mammals, the pen-tailed treeshrew of Malaysia who drinks fermented bertam palm sap and whose tolerance for alcohol  is even higher than our own—I’m sure they did.

The Hittites, however, made wine into an industry, an essential part of the social flow and indispensable to the daily diet—in other words, instead of waiting to trip over a fermenting batch of marula fruit out in the boondocks, the Hittites treated their bounty of vinifera vines as a commodity to be controlled, manipulated and profited from, both in a Noah kind of way and a Constellation Brands kind of way. 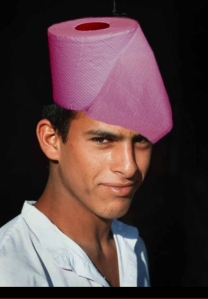 My new fez has made me the talk of Istanbul!

And perhaps within that outrageous notion is where our true debt of gratitude to the Hittites lies.

Anyway, if I was really going to thank anyone for the existence of wine, it would have to be Mr. Kloeckera, Mr. Candida, Mr. Pichia—strains of wild yeast that were fundamental to the Hittite’s nascent fermentation experiments.

But I’m not going to grovel before Saccharomyces cerevisiae.  We have nothing if not our pride.  Instead, I’m going with McIntosh’s suggestion:  I’m going to Turkey to find a real live Hittite and thank him in person for whatever the hell it is he did for us.

I mean, where else am I going to wear my brand new fuchsia fez??

2 Responses to Hittite Me With Your Best Shot, Turkey