There’s an adage in the wine business, on-premise and off:

‘Spend more than $100 for a bottle and you are starting to pay for the label’.

What that means, of course, is that a lot of folks suffer from Veblen Goods Syndrome, wherein they believe in an immutable ‘price = quality’ dogma which causes them to gladly shell out ridiculous amounts of money for Château Mouton Rothschild ($600), Salon Champagne ($300), Jasper Hill ‘Emily’s Paddock’ Shiraz ($125), Didier Dagueneau Silex ($120), Egon Müller Scharzhofberger Spätlese ($115)… 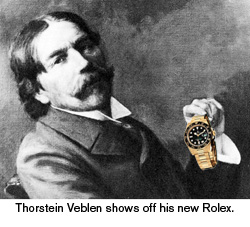 The syndrome, incidentally, is named for Thorstein Veblen; the first economist to write about the concept of seeking status through conspicuous consumption.

A brief breakdown of Veblen people who pay for the label in wines over $100:

Thug Nation homies who’ve cashed in on rap; nouveau-riche Chinese busino-weenies who can’t even pronounce the names of the wineries they buy; wealthy litigation attorneys who can rattle off all five Bordeaux Premiers Crus, weather patterns each Medoc vintage since Reagan was in office, every five-star Parisian hotel with a helipad—but who look surprised when you mention that New Zealand has a wine industry.

A brief breakdown of people who pay for the label in wines under $16:

Yes.  And we aren’t there yet.

First, let’s talk about the psychological phenomenon known as ‘re-invention of the self’, especially as it relates to the above examples of Veblenites and Buena Vista winery.

Joe Dispenza and his dispensable brain.

In his bestselling self-help book  ‘A Guide To Changing Yourself From The Inside Out’, the great chiropractor Dr. Joe Dispenza—erstwhile creator of those plastic cartoon-character Pez delivery conduits—discusses the emotional blocks of ‘vision creation’, methods of choosing courage over fear, the value of performing neuroscience experiments on marmosets instead of rats, and how such  techniques proved indispensable in the ‘self-reinvention’ of Calvin Cordozar Broadus, Jr.—former Baptist balladeer who became a coke-head crooner named Snoop Doggy Dogg, then a murdering minstrel (acquitted on both counts) named Snoop Lion, and currently, a disfigured has-been named DJ Snoopadelic.

Dispenza also has the strength of character to call a spade a spade, or in this case, a left-handed bowler who uses a wrist spin action—a.k.a., a  ‘chinaman’—a Chinaman: Hong Kong billionaire Zhang Zhirong who was born into degrading poverty and as an adult, reinvented himself  via the perspiration of thousands of others who came from—and remain in—degrading poverty.

And don’t get me started on the litigation attorneys with the wine cellars.  What statistic is more obscene to you?  That the United States, with 5% of the world’s population, uses 25% of her energy—or that we have 50% of her lawyers?

Mid-Life Crisis Cited As ‘Number One Reason’ For Personal Reinventions:

Jefferson Airplane, performers of such marvy 60’s classics as ‘White Rabbit’ and ‘Somebody To Love’ was reborn after a psychedelic, drug-filled decade as Jefferson Starship, who promptly began releasing puerile, unlistenable crap like ‘Sara’ and ‘We Built This City’.

Cassius Clay became Muhammed Ali at the age of 22, which is a bit young for a mid-life crisis, but repeated blows to the head caused him to age faster than the rest of us.

Chastity Bono treated herself to a boner at the age of 40 while her father Sonny,  a staunch conservative, became a tree-hugger at 62.

The Oldest Commercial Winery in Caifornia Comes of Age, And It’s High Time… 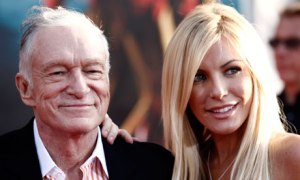 Hefner: ‘You’re never too old to marry a fetus.’

So, having celebrated its 156th birthday—the same age that Hugh Hefner was when he decided to resurrect his living corpse by marrying a girl in her twenties—it is no real surprise that Buena Vista Winery in Carneros was primed for a makeover.  Having seen six owners since 2000, with production drops and issues with infrastructure integrity, long-time employee Fred Unsworth maintains, “When I first saw the winery it was old and being kept together by chewing gum.  To those that have been here a long time, [the new owners] are a revelation, something that should have happened years ago and didn’t.”

Dudley Do-Right appeared at the opportune moment to save Nell Fenwick from Sonoma’s Northern Railway spur in the form of a Frenchman, Jean-Charles Boisset, who first saw the winery at the age of 11 on a trip to Sonoma with his grandparents.

Now the president of Boisset Family Estates, Jean-Charles reminsices about the ‘love at first sight’ swoon that fell over him during that first encounter and which he cherishes to this day:

“Love not only for the wines,” he gushes, “but as well for the buildings, for the style of the buildings and the energy of the place,” he said. “I never fathomed that such historical buildings were in place in California.  I fell in love with it.”

Somebody must have said, “Dude, get a room already,” because that’s what he did: In May, 2011, Boisset Family Estates purchased the brand, the inventory, and the California Historical Landmark tasting room—formerly a production facility—and immediately began a restoration effort.

“The wines are great,” Boisset explains, “but we can explain to people what a great region it is through its long-lost heritage. I envision Buena Vista to have a very strong future. The future is its past.”

Back in the 1840’s, a bombastic Hungarian braggadocio called Agoston Haraszthy de Mokesa decided to sail to America and reinvent himself in Wisconsin, which he quickly found to be too cold for winemaking—his family’s business.  So, along with the thousands of Forty-Niners wagon trains, he made for California in search of the kind of agricultural gold that sprang from the soil, not the mountains.  He dubbed himself ‘The Count of Buena Vista’—the sort of prerequisite name-change needed in personal reinventions—the same stunt pulled by The Artist Formerly Known As Prince and Slim Shady. 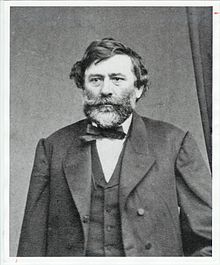 The Count of Buena Vista

One of the beauties of antebellum California was that you could tell people you were a Hungarian Count without having to prove it.  Growing wine grapes was a different story.   In that pursuit, you had to put your talent where your mouth was, and it proved trial-and-error for the Hunky homeboy, who first set up vineyards in San Diego (too dry), San Francisco (too wet) and San Mateo County (too foggy).

It wasn’t until 1857 that he discovered struck vinous gold in Sonoma, and established a winery based on the science of agriculture—something rare at the time, and something that only a fellow with deep pockets could hope to undertake.  Indeed, he went on a European perigrination just prior to the Civil War, and returned with five hundred cuttings from Europe’s top wine-producing countries.

The Count hoped that his true contribution to California winemaking would be his demonstration of modern methods of viticulture and premium varietal choices, which he was convinced would make the fledgling state a world-class vintner, writing, ‘…wine-growing in this State will, before long, exceed in value the amount of gold exported.’

History has proven out this odd, committed visionary many times over. 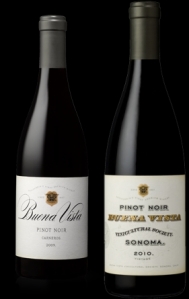 So, I began this War ‘n’ Peace length jeremiad spewing jealous pique righteous indignation over those who can afford to spend money on wines with famous names on their labels while I have to wait for free samples to arrive by UPS.

As to the quality of the product, those reviews appear below.  But I must say, when Jean-Charles—the new ‘Count of Buena Vista’—decided to get a room with the old one, I’m glad he chose a room with a view.

As consistent and predictable a package as you might expect from a winery’s first (and 157th) release, Buena Vista’s varietals are the usual suspects, the vintages what you’d imagine them to be and the price identical—$16—for each one. 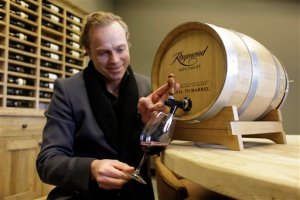 Will the REAL Jean-Charles please stand up? (Shut your eyes and pretend that the barrel says ‘Buena Vista’.

Buena Vista Vinicultural Society Merlot, Sonoma, 2010, around $16:  Medium-bodied with stereotypical Sonoma merlot suppleness; the aroma is all over the mixed-fruit map and includes blackberry, huckleberry and velvety cherry jam.  Mildly-oaked, showing a bit of spice and vanilla throughout the palate, with a quick, but satisfying finish.

Buena Vista Vinicultural Society Chardonnay, Sonoma, 2011, around $16:  A gold-hued (49ers-approved) wine with green apples, nutmeg and lime on the nose, honey and pineapple in the mouth and a discreet butterscotch finish.  Not over-the-top massive, but restained and classy. 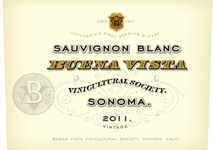 Buena Vista Vinicultural Society Sauvignon Blanc, Sonoma, 2011, about $16:  Focusing on the citrus side of the varietal, the wine displays a nice soul of lime and grapefruit; the slight grassiness is mostly fresh-smelling and gentle.  Crisp acidity enlivens the palate, with exuberant notes of melon, candied lemon and pear.  I also picked up a distinct note of cardamom—but I’d already cheated and read the winemaker notes who said that I’m supposed to.  Maybe it’s psychosomatic—among the various psycho things I confess to.