What Alcohol Really TRULY Does To Your Brain

Earlier this week—on October 16, to be precise—Forbes Magazine published a column by David DiSalvo called ‘What Alcohol Really Does To Your Brain’.

Well, my friends, I read it and it is complete plonk.  Mixed with hogwash.  Sprinkled with poppycock, piffle and hooey and stirred with fiddlesticks.

But, if you also read it, you already know that since it was written by a fellow who lists as his literary raison d’être  ‘…Writing about science, technology and the cultural ripples of both.’ 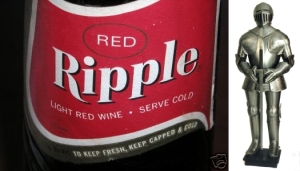 Now, as a world-renowned, Oxford-educated enological whiz-bang who has won the Nobel Prize in Shiterature every year since dynamite was invented, I must say that anyone who mentions Ripple in his wine bio has lost my professional respect before he begins.

So, old and exhausted as I may be, I suppose I will now have to pull on my medieval body armor, my pauldrons and gorget, my chain-mail and boar’s tusk helmet and toss a salvo back at DiSalvo.

First, Let Us Examine His ‘Premises’:

1.  Why drinking makes you less inhibited…

DiSalvo sputters out some unconvincing claptrap about booze ‘depressing the cerebral cortex’s behavioral inhibitory centers’, as though our brains are filled with little suburban shopping plazas where teenager-like neurotransmitters spend daddy’s paycheck on Hollister glutamates and Abercrombie & Fitch intracellular dopamine.

What actually happens is that after a couple Jaeger Bombs your circadian photoentrainment circuits (vision) improves exponentially, and as a result, not only do you recognize the true depth of your manly machosity in the Men’s Room mirror, you also realize that the ‘7’ in the corner booth with the tattooed bodybuilding biker boyfriend has become a ‘9.5’ in a corner booth with Seymour Krelborn from ‘Little Shop of Horrors’ as her date—and that the angry sneer she’s been casting your direction is actually a ‘come hither’ pout of sexual interest.

The fact that you awaken in the post-op ward at Beaumont Hospital with tubes in your nose leads to DiSalvo’s second postulation:

2.  Why drinking makes you clumsy…

I thought ‘cerebellum’ had to do with Sarah Bernhard’s acting career before the Civil War, but it turns out to be a swamp-colored, crumbled-up knob of fleshy tissue at the base of the brain which—according to Wikipedia—is responsible for ‘motor control’.

Okay, then, Mr. Smarty-Pants: I was taken to the hospital via ambulance and did not—repeat, did not—have to control any motors.  I lost that fight because I got sucker-punched by a nerdy florist while staring at the fleshy tissues of the booth girl and not because of any malfunction in my metencephalon, which is the upper part of the rhombencephalon within the medulla oblongata.  Duh.

This one doesn’t pass the very first smell test.

Obviously, any mention of two of the squishiest, repulsivist, most non-sexiest parts of the human anatomy—the hypothalamus and pituitary—have no place in a mature discussion of sexual arousal and subsequent Sting-quality tantric performance, or lack thereof.

Bones do.  So, the reason that you suddenly want to jump the bones of the cocktail waitress, who is not only your best friend’s wife but also your younger sister—has nothing to do with any icky secretions of thyrotropin hormones or serum concentrations of androstenedione.  Far from it.

You see, David, Knob Hill 101° stimulates the heart, not the brain—specifically, that section of the right artrioventricular orifice which controls bonhomie, philanthropy, charity toward ugly chicks and the sincere magnanimous conviction that all women, no matter how deformed, overweight, annoying or retarded, deserve the same sort of sexual gratification as Madonna received during her still-cute heyday.

And if any erectile dysfunction on the part of this drunken man should follow, be assured that it is not the result of bourbon-induced nerve-impulse blockage or constricted blood vessels in the ol’ meat thermometer, but rather my firm, unwavering ideology that all women—even big-tissued mini-skirted bar chicks—are not to be objectified, considered a commodity or put to ‘use’ without regard for their personality or sentience.

4.  Why drinking makes you sleepy…

Clearly, David DiSalvo has never been on a week-long bender, and that is perfectly understandable.  Working for a dead multi-trillionaire like Malcolm Forbes probably prohibits long stretches of unaccounted-for absence followed by phone calls to Human Resources by a warden, a doctor, a coroner or a cop.

But I can assure you, once you are firmly in that Sazerac saddle, you do not fall off it easily.  You don’t work, play, procreate, write, sing, invent game-changing alternatives to nuclear energy, discover cures for  Creutzfeldt-Jakob Disease, find prime numbers in the Catalan–Mersenne number conjecture or eat.  You drink.

Most assuredly you don’t sleep, because you understand instinctively that sleeping interferes with precious drinking time.

Now, I know what you’re going to say: Since I can’t remember ninety percent of what happens during lost weeks, perhaps I do sleep and just forget.  Well, I say to you, ‘If you are going to play by your rules instead of mine, I’m taking my wine column and going home.’  Capicé?

Anyway, people, there you have it—and my advice to you is elementary, mandatory and easier to digest than milk toast over a three-minute egg:

In the future, if you want to know about spatiotemporal economics as described by morphological syntax and how it specifically relates to the collapse of Lehman Brothers and Bear Stearns, read Forbes Magazine.

If you want to know how alcohol affects the brain, read someone who knows whereof he speaks.  Like me.

This entry was posted in GENERAL and tagged David DiSalvo, Forbes Magaine, How alcohol affects the brain. Bookmark the permalink.