My writing laboratory is loaded with Aryan research assistants.

I have a nearly unhealthy fascination with twins; one I believe may rival that of Josef Mengele.  I’ll explain, but first, while the implication settles—a wine writer beginning any column, at any time, anywhere, with a direct reference to a Nazi war criminal—let me say in my Nuremburg-quality defense that I am a wine writer by default alone.

My medical career was short, but Mattel made a doll of me anyway.

In point of fact, my real goal in life was to become an alcoholic stand-up comedian, or barring that, an alcoholic brain surgeon.

Unfortunately, I freeze in front of crowds to the point where I can’t even address my kids at the dinner table; also my hands shake uncontrollably whenever I ‘tense up’ which is whenever I see the slightest drop of blood.

As a result, ‘wine writing’ became my career goal Chapter 11.

So—before I get into the meat and potatoes of this piece, rather than performing a vicarious endovascular coiling on your groin,  I’ll tell you a little joke instead:

Guy walks into a bar.  Bartender says, ‘What’ll you have?”

“Bourbon, straight up,”  the guy answers.  But when the bartender hands him a tab, the fellow says, ‘Hang on.  You said ‘What’ll you have?’.  That legally constitutes a free exchange.  I’m a lawyer; I know.”

Understandably pissed, the bartender says, “Okay, but finish up quick and get the hell out and never come back.  You’re barred permanently.”

Next day, the same guy shows up.  Bartender says, “WTF? I told you never to come back in here.”

Dude responds, “What are you talking about?  I’ve never been in this place before in my life.”

Have you ever learned that somebody you’ve known peripherally for a long time, through work or somewhere, has a twin?  And had trouble wrapping your head around the idea?  I’m sure it’s a commonly shared experience.

This one, I figure, is not: On three separate occasions during my life, I have had the above random conversation with folks who have responded, ‘’Well, I have a twin.’

So the whole twin thing has become sort of inexplicably Twilight Zone eerie to me and I now look upon twins with a certain vigilant askance—which, for those who now suspect me of being a Nazi sympathizer, means ‘sideways’–a hip wine reference.  It does not mean that I care what color the Lange twins’ eyes are, nor how they got that way.

A Lange Harangue About How They Hang 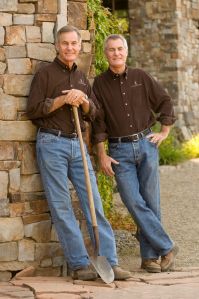 How precious is it when mom dresses the twins EXACTLY ALIKE!

For the record, the Lange twins are a pair of Hollywood-handsome, distinguished-looking winery owners who are scions of a gang of mostly non-twins who have been growing grapes in  Lodi for five generations.  As vintners, they produce a dozen wines, including unique lots like musque-clone sauvignon blanc and effervescent Muscat Frizzante.

The Lange fame claim is a vigorous adherence to practices of sustainable agriculture—an ‘ecosystem’ approach which you would think by now would be table stakes for the highly competitive California grape growing industry, but which apparently is not.

Why?  Probably because it isn’t necessarily cheap, and requires a lot of dedication to  interests beyond your immediate crop.

Lange One (Randy) writes in his ‘blogpost’:   “Sustainable winegrowing is all encompassing in its approach, and unlike other farming practices, it requires concern for all surrounding environments, not just with the winegrapes* that are grown.”

* The winery is named LangeTwins, with no space between the two words.  Apparently, this quaint quirk carries through to ‘winegrapes’ and ‘blogpost’ as well—words which become, under deft Lange manipulation, Siamese twins.

Lange Two (Brad) agrees: “It is the balance of environmental health, economic profitability, and social equity. From generating clean energy with solar panels to restoring native habitat areas among our vineyards, we are committed to improve our environmental practices. Ultimately, each element plays a vital role in the integrity and quality of our wine.”

Another element which plays a vital role in the integrity and quality of Langewine is David Akiyoshi, a second generation winemaker who is not only not a twin, but has a legitimate, sustainable space between his two names.  He boarded the Twin train in 2005 after 25 years at Robert Mondavi’s Woodbridge, and raves about Lodi’s capacity as a host planet for zinfandel:  “Long before there were AVAs,” he says, “and 100 point scores, European immigrants who settled in Lodi began planting zinfandel because the grape—and the land—reminded them of what they left behind in Europe, even though zinfandel was never an important grape over there.”

Alas, the munificent gods of free samples opted to skip the zin in favor of the chardonnay and cabernet, upon which I will perform unnaturally diabolical experiments of brain dissection below…

But First, a Healthy Shot of Huh (?) Regarding the LangeTwins ‘Blogpost’:

For absolutely no discernible reason that I can surmise, the above quoted blogpost entitled ‘A Slice of Lodi’s Zinfandel Past’ leads with the following:

‘Elvis was always a dutiful child, and here everybody was thinking he’s wild…’ 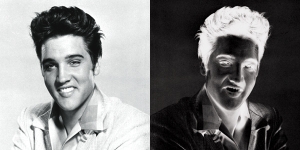 Is this because Elvis, as many of us realize, was a twin?

It’s possible, I suppose.  We can, perhaps, look forward to future quotes regarding the following, all also, surprisingly (to me) twins:

LangeTwins Chardonnay, Clarksburg AVA, 2010, about $15:  This is a luscious and lively chardonnay, but damn if it doesn’t have a sauvignon blanc nose.  In a blind tasting, I would have bet the lower forty on it.  One of California’s least known appellations, Clarksburg sits just beneath Sacramento and produces wine of solid, but mid-level quality.  This is a nice one, no doubt, once you rationalize away the grapefruit nose as being a potential blend of key lime and pineapple aromas.  Creamy in the mouth due in part to barrel fermentation, shows an edge of almond and tangerine, giving it a unique slant.  Serve with a pair of cornish game hens.

LangeTwins Cabernet Sauvignon, Lodi, 2009, around $15: Supple, soft, spicy and sweet, this is a ‘drink tonight’ cab with dried cranberry on the palate along with black cherry, cedar, cassis and chocolate. Youthful and deep, this is a wine to tuck into rather than tuck away; the growing season was somewhat challenged, and big harvest-time rains diluted the product a bit.  Fine to drink now, but I’d be cautious about holding on to it long.  Serve with a brace of roasted round eye rounds.