It’s Up To You, New Cork, New Cork

What do corks and Mork From Ork have in common?

It’s number three, of course—sentiments that apply not only to cork and Mork from Ork, but also to Bjork and Mickey Rourke.

Barking Up The Wrong Tree?

Elastic, nearly impermeable, inexpensive and readily available, you’d think that cork must enjoy as venerable and antiquated a wine history as glass bottles—invented by the Phoenicians around 1000 BC—but in fact, prior to the 17th century, most wine bottles were stoppered with everything except cork.  The Greeks poured a thin layer of olive oil over their amphorae, then sealed them with pitch; the Romans often used hand-turned wooden stoppers, the English ground glass to fit individual wine bottle necks while the French preferred oil-saturated rags. 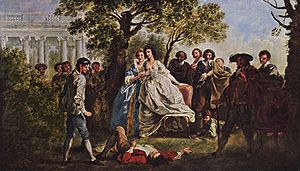 But by the time of Shakespeare, cork magic was beginning to settle over the wine industry, and a line from ‘As You Like It’ delivered by Rosalind to her cousin Celia, indicates the ‘trendiness’ of the new technology:

“I pray thee take thy cork out of thy mouth, that I may drink thy tidings.”

The Rain in Spain Is Mainly Thought A Bane

For those of you who thought that cork came from County Cork in Ireland, please log off immediately and return to your assigned ward; Nurse Ratched will be around with your meds directly.

For those that remain, of course, the once-massive cork industry is centered in the temperate plains of Spain and Portugal, where cork forests form an amazingly diverse ecosystem, providing a habitat for the world’s most critically endangered feline, the Iberian Lynx. 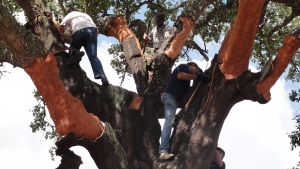 The quercus suber, commonly called the cork oak, is an evergreen oak tree with such a finicky laundry list of agricultural requirements that it really only thrives in a few areas of southern Europe and northwest Africa.  Portugal leads the way, providing about 50% of the world’s cork, followed by Spain, Algeria and Morocco.  France, Tunisia and Italy contribute to the industry as well, albeit in lesser amounts.

It’s a particular, unusual version of the Mediterranean climate that suckers quercus into submission—not much rain, plenty of sunshine, mild winters and relatively high humidity.  Oddly, forest fires are no real issue, and in fact, the reason why the tree is so uniquely suited for wine bottle stoppers is that the bark is an evolutionary firewall.  Most trees die when the bark is removed, but quercus has two distinct layers—the living inner layer forms a base on which the outer layer, which is dead, exists, basically serving as insulation against the occasional fires that the parched conditions encourage.

Unlike other evergreens, who regenerate from seeds—basically starting over from scratch after a fire—a cork oak regrows much more rapidly, as the insulated branches themselves sprout, forging a path to quick recovery.

So You Want To Start a Cork Farm?

Better get cracking, then.  It takes about fifty years for an individual tree to mature to the point where its bark has sufficient cell density to be considered stopper-material; earlier harvests wind up as floor tiles, fishing rods, floats, acoustic insulation and—believe it or not—spacecraft heat shields.

Once that half century has passed, bottle-stopper cork is harvested every nine years, entirely by hand since the critical inner bark cannot be penetrated or else the jig is up.  Treated with dignity, a single cork tree can live to be two hundred and may provide 65,000 stoppers.

So, with all the benefits arising from all natural, biodegradable, sustainable, job creating, eco-friendly cork, where is the issue?

TCA is a wine spoiler so virulent and off-putting that wines thus affected are, perhaps unfairly, referred to as being ‘corked’—likely because calling them ‘trichloroanisoled’ would be a bit too show-offy, and we all know that under no circumstances do wine geeks like to show-off.  Ever.

And yet, it has never been directly and definitively demonstrated that taint passes from a cork into the wine, or is an airborne fungus passing through a cork into the wine, but ultimately, it makes no difference. Nor that, whereas the cork industry maintains that cork taint affect between 0.7% – 1.2% of wines, the wine industry hold out for a much higher percentage, possibly as much as 10%.  In any event, once the scare was in, wineries began to search for alternate closures to lessen the bad PR, and thus were born several new industries—synthetic corks, aluminum screw caps, Alcoa’s glass and plastic Vino-Seal and pricey but efficient Zork corks—which sprang up to fill the void.

The massive hemorrhage of market share—based on public perception as much as reality—saw cork sales plummet in the first years of this decade, and insiders raised serious doubts that the industry had potential for long term survival.

So, now that all the Irish cork theorists have been subsumed back inside the Oregon State Hospital, I can bring out the folks in white coats without fear of general panic, right?

Over the past few years, scientists (hired by the cork industry, obviously) have been working diligently to improve both the quality of cork manufacturing and enact stricter protocol in certifying quality corks.  As such, it has been suggested that TCA may ultimately go the way of smallpox and be eradicated wholesale from the face of the planet.  As such, the industry has rebounded remarkably—a needed shot in the arm for Spain particularly, which is slogging through its second recession in three years.

As TCA becomes less and less of a concern, the benefits of a natural product should overrule the use of more non-biodegradable plastic and metal in wine stoppers.  At least, one can hope.

So, another spot quiz to demonstrate that you did not fall asleep during the second paragraph:

Excellent, three for three.  I knew you’d never nod out on me, class.

You are now officially awarded membership in the Confrérie des Chevaliers du Cork Dorks and may proudly wear ornate robes that are duplicates of those worn by Doctors of Corkology in 17th century French mental institutions.

This entry was posted in GENERAL and tagged one flew over the cuckoo's nest, TCA, wine closures, wine corks. Bookmark the permalink.

1 Response to It’s Up To You, New Cork, New Cork

Leave a Reply to Jeffrey B Haskell Cancel reply