News Flash: Red Wine Is Good For You And Guess What? I Couldn’t Care Less

Personally, I tend to wake up half an hour before God, so it’s not unusual for me to pour moscato over my cornflakes, but as a pre-schooler, I was alone in the ill-advised habit of drinking first thing in the morning.

Mainly because everyone else slept in past noon.

In any case, right or wrong, we drank to our health, but safe to say the only thing we did not drink for was our health.

Dear Morley,  it’s safer to be Rather; unless you’d rather be Safer.

Ever since that infamous French Paradox segment on 60 Minutes aired back in 1991, I have read endless affirmations of the show’s central premise: That drinking a glass or two of red wine a day is beneficial to one’s physical as well as emotional well being.  The basis of the paradox was that, for reasons then TBD, French people suffer a lower incidence of coronary heart disease than Americans despite their higher intake of saturated fats.

Although not satisfactorily explained, it was concluded—mostly by red wine makers who promptly began to lobby the FDA for the right to label their product ‘health food’—that the sole difference between the French and American lifestyle was the former’s consumption of more red wine.

Drunk Hungarian Santa. Is nothing sacred any more?

Never mind the fact that Andrew Mente; Lawrence de Koning; Harry S. Shannon; Sonia S. Anand, authors of ‘A Systematic Review of the Evidence Supporting a Causal Link Between Dietary Factors and Coronary Heart Disease’ (2009) concluded that there is insufficient evidence to establish a correlation between Big Macs and big heart attacks, and never mind that the French really don’t drink that much more wine than we do while the Czechs, Hungarians, Germans and Croatians all drink more wine than either one of us and croak of coronaries at a rate higher than both of us.

And most of all, never mind the fact that in the typical French diet, the following factors seem salubriously superior to the way we stuff our American gobs:

Note that in the above list, there is no mention of wine.

“Finish Your Merlot, Son; There Are Children Going to Bed Sober in Africa”

Once we begin to slither and slabber down that slippery slope of slackness, pretending that our individual consumption of alcohol has anything to do with our health, especially when The Centers for Disease Control and Prevention lists moscato ‘n’ Kellogg’s abuse as the third leading cause of preventable death in the United States after tobacco and—you guessed it—poor eating habits, we are behaving as textbookly optimistic Americans.

Listen up, people: Optimism has no place in any serious, deliberate, contemplative overview of reality.

Most recently, the NY Daily News published a piece entitled ‘Six Good Reasons To Toast Your Health With Wine’ which alienated me with its first two words:

I hate the word ‘oenophile’.  In the first place, it’s pronounced ‘eenophile’, so why is there a superfluous ‘o’ instead of an extra ‘e’?  Li’l help here, Merriam-Webster?  Secondly, I am not, and never have been an oenophile.  If a pedophile is attracted to little kids and a homophile is attracted to members of his/her own sex and if a Francophile is attracted to Hebrew National Kosher Hotdogs, then it follows that an oenophile is sexually attracted to wine bottles.  I defy the most die-hard oenophile to try that on for size without getting stuck and having make a life-altering trip to Beaumont Emergency Room.

But, reading further in the article, it lists (as promised) six so-called health benefits to slugging red wine, which I will give below and promptly rebut—being a dyed-in-the-wool rebutophile.

. Protect your brain: Evidently, older women who drank one or more drinks per day, every day, scored better than teetotalers on memory tests.  The explanation given was that wine helps prevent clots, reduce blood vessel inflammation, raise HDL (good cholesterol) which unclogs arteries.

Rebuttal: Protect your brain? Seriously?  The zombie apocalypse started and I missed the memo?  And what’s more, did we not grow up with the absolute conviction that drinking drink kills brain cells rather than protecting them?  And about those morning-after migraines…

No, researchers, I think you need to go back to the babbling board: Protecting the brain is the provenance of the skull, Omega-3-rich fish flesh and Fusion In-Mold, ErgoDial fit system bike helmets.  Not shiraz.

2. Zap the fat – Purdue University eggheads claim that there’s a compound in red wine, blueberries, and passion fruit that blocks immature fat cells’ ability to develop and grow. Studies find that people who drink wine daily have a lower body mass than those who indulge occasionally.

‘Never, ever have I drunk wine to elevate my testosterone levels. Never.’

Rebuttal: Wine is largely composed of what fat people who want to be not fat people call empty calories; a glass of wine equals around 100 calories—same as a jumbo egg, only without the 8 grams of life-sustaining, muscle-building, hair-on-back-growing protein.  Plus, wine’s inherent ability to lower inhibitions will cause you to order double-cheese meat lover’s pizza at midnight and eat the entire thing yourself.  No, people, I think we need a sanity check on this one: If you convince fat people that wine is the ticket to weight-loss, you are going to end up with a bunch of drunken buffarillas wandering around; is this what you really, truly want?

3. Good for your gut:  A Spanish study found that the polyphenol content in red wine can promote the activity of healthy and beneficial bacteria in the human plumbing system, combating such icky disorders as celiac disease and irritable bowel syndrome.

Rebuttal:  A Spanish study?  Is that Spanish as in Spain—the land that Britain’s Halifax Research Centre determined was where travelers are most likely to contract food poisoning?  Where they eat sopa de ojos (eye soup), pasta con pies y pelo (pasta with feet and hair) and algodon con sal (salted cotton candy?)

Protect the gut?  I’m getting sick to my stomach even thinking about it.

4. Protect the ovaries: Australian researchers found that the antioxidants and phytoestrogens in a single glass of wine a day seemed to reduce the risk of ovarian cancer by as much as 50 percent.

Rebuttal:  I drink three or four bottles of wine a day and have managed to reduce my risk of ovarian cancer to 0%.

5. Build better bones:  Apparently, women who drink have higher bone mass than those who do not drink.  Alcohol, one study postulates, boosts estrogen levels, slowing the body’s tendency to self-destruct as it ages.

Rebuttal:  So, along with my better bones, my elevated estrogen offers me decreased libido, erectile dysfunction, shrinking bollocks, moobs and loss of hard-won chest hair, which should make my new moobs even more prominent.  Before you know it, I will start renting romantic comedies starring Jennifer Aniston, going out for brunch at Neiman Marcus, buying piña colada-scented candles and, every twelve seconds texting my girlfriends who I will actually like, not hate (like my current friends), but will bad-mouth anyway.

And not to put too fine a point on it, but other studies have shown that increased estrogen production raises tumor progression in women with, or at high risk for, estrogen-positive breast cancer.

6. Safeguard against Type 2 diabetes:  According to a 10-year Harvard Medical School study, one or two glasses of wine per day were found to decrease risks of developing Type 2 diabetes by as much as 40%.

Rebuttal: On the other hand, if you consume more calories each day than you burn, triglyceride levels go up—particularly when these calories are from dietary sources high in simple carbohydrates and alcohol.

Like wine.  High triglyceride levels in the blood can contribute to a condition called diabetic dyslipidemia, and may lead to… you got it, Type 2 diabetes.  Not only that, but very high triglycerides—in the range of 1000 mg/dl—have been associated with memory loss (see #1 above) and abdominal pain (see # 3 above). 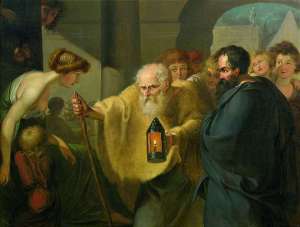 Your humble narrator in search of an honest drink.

The point of all this is not to talk anyone out of drinking copious oceans of wine so long as they are not driving, working, calling friends at 2 AM, speaking to random strangers in the mall or attending child custody hearings.

Whenever I read these bestselling bundles of baseless bull ballyhooing the health benefits of demon rum, I am—as Ombudsman for the Outspoken—reminded of Matthew Henry’s famous Presbyterian proverb:

…and, like Diogenes of Sinope, I am thereupon forced to pick up my lantern and go off in search of an honest man with a hip flask.

This entry was posted in GENERAL and tagged Diogenes, French Paradox, Health benefits of wine, Rosie O'Donnell is fat. Bookmark the permalink.

6 Responses to News Flash: Red Wine Is Good For You And Guess What? I Couldn’t Care Less

Leave a Reply to Alphonse A. Schindelholz Cancel reply