What’s In A Name, Other Than ‘Insane Fornicating Testicles’? Ask The Chinese…

What is the deal with Chinese people and wine, anyway?  In 2011, Commieville wine sales rose by 20%–most of it intended for the gullets of the PRC’s upwardly-mobile millions—and meanwhile, Chinese investors have kicked the price of Bordeaux futures through the roof ($70,000 was ponied up for a case of 2009 Lafite before it was even bottled), begun to buy up Australia (‘Every vineyard buyer that I have on my books right now is Chinese, every one,’ says Hunter Valley estate agent Cain Beckett) and now, they want to tell Chileans what to name their pinot noir. 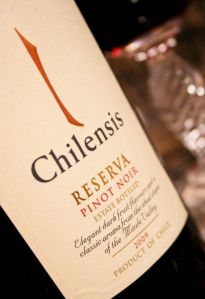 According to certain Hong Kongers, Maule Valley winemaker Via’s recent insufferable Sino sin was the decision to market  reserve pinot noir as ‘Chilensis’, a word reported to mean ‘Fucking Nuts’  in Cantonese.  What’s less clear is if ‘nuts’ refers to scrotum stuffers, squirrelly snackadoodles or sanity suspects, though the first word is pretty easy to interpret.

This story has been given a lot of airplay, but little of it from Cantonese people, who might explain that the actual offensive phrase is ‘chilensin’, and that ‘Chilensis’ causes no more Chinese chagrin than if an American was to see a wine called ‘Funking Nits’.

What is not in question is that, over the past few days, publicity around the weirdly-named wine has caused its  price to skyrocket faster than a case of 2009 Lafite at a Chinese auction.  Turns out that the marketing ploy was a smart one after all, which may or may not explain the quid pro quo spirit of winemakers in China’s Xinjiang region, who have now released a merlot called ‘Go Splooge All Over Your Number-One Forefather, You Smelly Spic’ specifically for the Chilean market.

In future, this tale may be further tailored to suit the requisites of urban folklore–and the horrors inherent in slipshod language research.  If you’re old enough to remember Jimmy Carter, you may recall Polandgate, when his translator used the wrong verb to announce that President Carter ‘loves the Polish people’, saying instead, ‘President Carter sexually desires the Polish people.’

I’d laugh, but I made the same gaffe in Mexico when I told a friend that her sleepy five-year-old daughter looked like she was ‘ready for bed’, accidentally using the Spanish slang phrase for ‘she looks old enough to have sex’.

And yes, if you must know, that’s exactly where this scar came from.

Legend has it that Pepsi’s Taiwanese ‘Pepsi Brings You Back To Life’ campaign wound up as ‘Pepsi Brings Your Ancestors Back From The Grave’—for which they had to issue a special label warning: ‘Make sure you hit the brain…’

Always the competitor, Coca-Cola then launched its soft drink using the Chinese phonetic name Kekou-Kela, which, depending on dialect, means ‘Bite the tadpole’ or ‘Female horse stuffed with wax’.  Don’t know about you, but personally, given the choice of Coca-Cola, mare or frog spawn, I’m going tadpole.

In Arabic, The Jolly Green Giant translates to The Intimidating Green Ogre and in Hànyǔ, Kentucky Fried Chicken’s slogan ‘Finger-lickin’ good’ comes out as ‘KFC makes you eat your own fingers’

…And best of all, when Gerber began selling baby food in Africa, they used their iconic baby picture logo, unaware that (since most rural Africans can’t read) companies routinely put a picture of the jar’s contents on the label—and interestingly, Gerber quickly became Uganda’s top-selling brand.

Renamed the 'Chevy Will Too Go'

How much truth there is to these stories I can’t say, but I can debunk one of the classics based on my above-referenced experience in the Mexican auto industry.  My co-workers used to get a kick out of the fact that Americans truly believe that the Chevy Nova didn’t sell well in Mexico because ‘no va’ in Spanish is ‘won’t go’.  Never mind that ‘no va’ and ‘nova’ are two different words with two different pronunciations, and forget that Mexicans wouldn’t ‘get’ the ‘won’t go’ concept since they say ‘no functiona’ or ‘no manejar’ (won’t work or won’t drive).  The real trump is that Chevy almost invariably uses different branding for vehicle lines in other countries, and in Mexico, Nova was called the Caribe—and it sold very well.

But then again, why let the facts get in the way of a perfectly good story?  I’d be happy to tell you that Caribe’s direct English translation is  ‘An Overpriced Hunk Of Soon-To-Be-Rusted-Beyond-Drivability Shit Made By Line Workers On Heroin’, and we could chuckle about it over a few glasses of Fucking Nuts.

25 Responses to What’s In A Name, Other Than ‘Insane Fornicating Testicles’? Ask The Chinese…