Posted on January 8, 2012 by intoxreport

Of all High Holy Feast Days celebrated throughout the liturgical year of America’s one true religion—Orthodox Schlockologyism—today is the most sacred.

‘For the angel said unto them, ‘Fear not: for, behold, I bring you good tidings of great joy, which shall be to all people except for Leopold Stokowski and jealous Negroes.  For unto you is born this day in the city of Tupelo a Savior, who is Elvis Aron, the King.’ 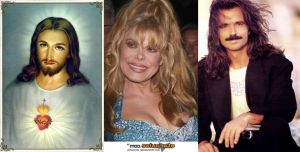 Indeed, between that glorious January day in 1935 until Kiester Sunday, 1977 when the King died on his throne while attempting to move mountains, no performer in history has so magnetized the Schlockologist laity.   Like Jesus, Charo and Yanni, so universally beloved is The Hillbilly Cat that no surname is required to bring instantly to mind an image of a shimmy-hipped, greasy-haired, curly-lipped country cracker fittin’ battles and knocking down the walls of every Jericho from London, England to Dickshooter, Idaho .

And if you have not yet had the spiritual Epiphany (a lesser Feast also being celebrated today) of visiting Graceland, do not forget that, like Muslims to Mecca, every Orthodox Schlockologist is required by Canon Law to make a pilgrimage to that sacred Memphis site once in their lifetime.

Me, I’ve already been there twice; the first time in the eighties when I loudly demanded to see the Dumper of Death, only to be told tersely by the guide that the upstairs bathrooms were off-limits.  After the tour, a young lady asked me if I was traveling alone, and when I said ‘yes’ she replied in true awe, “Wow.  I’ve never heard of anyone who could be an asshole when they were by themselves.”

In any case, we all know that Mr. Hippie-Dippy Pretty Boy from Judah had a jones for wine—and when He ran low, He could whip it up easier than Paula Deen can make a butter-flavored lard cookie with possum-fat icing.

But what about Elvis?

We all know that in a perfect world, his beverage-of-choice would have been Satnin Presley breast milk, but alas, the world ain’t perfect and that particular stash dried up in 1960.  So, with his vast fortune, sophisticated posse, and hopeless hankering for intoxibration, was he ever able to break from his Southern bevvie birthrights: Sweet tea, Dr Pepper, lemonade and Jack-and-Coke?

You know what I hate worse than rich people who can afford to build custom Balau Mahogany wine cellars with Tuscan arches and bluestone floors, then cram them with thousands of bottles of priceless collectables?  Those who can build them and don’t.

Elvis was one of those.  To his credit, he did contract a thousand-square-foot Philippine Walnut barbiturate cellar with electronic humidity control, grilled glass front doors and double-deep pill cabinets, which he kept stocked with vintage Seconal, Amytal, Nembutal and Tuinal.  But when it came to wine, by all accounts, the Memphis Flash was strictly a Blue Nun kind of king. 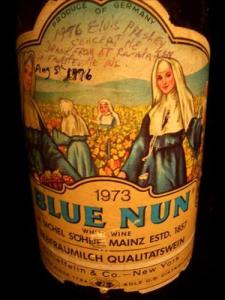 The accompanying photograph shows a bottle of Blue Nun from which Elvis actually guzzled before a concert on Aug. 5th, 1976—a police officer working security snagged the (unsigned) bottle and is now selling it on elvisowned.com for $900—roughly the same price you’ll pay for a 98 point (WS) 1982 Mouton-Rothschild.

So, having established that Elvis was not much of a wine whiz-bang, and in fact, preferred the plonky cheap crap, why would a company launch a wine line tagged Jailhouse Rock Merlot, Blue Suede Chardonnay and Blue Hawaii Riesling?  These names aren’t even charmingly kitschy dans le mode de Marilyn Merlot/Sauvignon Blonde, and in fact, they make no sense.

Navin R. Johnson, can you help us out here?  Ah, thanks; now I see…

Now, that makes sense.  The Elvis Presley Wine Cellars web site leaves us with a scrunchy look of puzzlement, however.  It states:

So uncork your favorite Elvis tunes, swivel those lips and get ready to rock your palate with the incredible flavor of the King of Rock and Roll™.’

Uh, swivel those lips?  I think even those of you fallen-away Schlockologists who became weary of our clergy’s myriad sexual scandals, money handling issues and homage to false gods (Elvis Herselvis, The Flying Elvises and Elvis Costello) will recall that the ‘E’ swiveled his hips.  He curled his lips.

Now, I will not offer individual reviews of these stupid wines because I really don’t want you to buy them, drink them or even think about them.  They’re too schlocky-sounding even for Schlockologists.  But I will offer a schot at redemption for those of you who have wandered from the path of righteousness.

Here’s the type of letter I receive almost on a daily basis:

I don’t know how or why I left the Church of Schlockology. There wasn’t really any one reason. Life moved on, and so did I. Career, relationships, other concerns… perhaps no one noticed I was gone. And maybe I wished someone would have come looking for me. But lately, I feel that Someone has—is it Elvis’s spirit within, calling me home? Where can I re-connect?

My response was immediate, succinct and (I presume) helpful.

Should be worth $9000 on elvisowned.com. Right?

Yes, it is indeed the Spirit of Elvis that is calling you, and I can help you to become a Schlockology ‘revert’.  But, as evidence of worthiness, you must first perform an act of penance.  Travel to Memphis, break into Graceland, sneak upstairs and fetch me the toilet brush from the Dumpster of Death.  Liquidate anyone who tries to stop you.

Oh, and keep us the fuck out of Iran.  That should do it.

This entry was posted in GENERAL and tagged Elvis Presley and wine, Schlockology. Bookmark the permalink.