If Paris In The Spring was a coin, the flip side would be Michigan in November.  Post-Halloween—in boondocky counties like Berrien especially—everything deteriorates into the sort of dreary dystopia imagined by Huxley and Wells.   Cornstalks turn colors not seen outside autopsy rooms, pumpkins rot on porch steps, paint peels from abandoned farmhouses, rain dumps down as For Sale signs go up, Happy Hour at the Dew Drop Inn runs from 3 -5 PM, leaving twenty-two subsequent hours to contend with.

So yesterday, naturally, this is precisely the spot where I chose to get lost.  And not just lost—severely, howlingly, expletively so.

Driving blindly through rural farmland, the first thing you notice are that there are no street names, no gas stations, no CVS stores or even random escapees from prisons or assisted living joints that you could ask for directions.  You also notice that there’s nothing on the radio except born-again babble, really bad country music and oldies stations with a penchant for that most hideous of all musical genres, ‘70s soft rock.

But then—just as the conviction, ‘Sooner or later this stupid road has to hit an Expressway’ fades to ‘Abandon all hope, ye who enter here…”— you (in this case me) see a sight that ultimately corroborates St. Anselm’s ontological proof of God’s existence.  No, not an I-94, Next Right sign…  Even better: Grape vines.

And there it was, shining like a lighthouse beacon upon a storm-ravaged shore: sweet refuge; Domaine Berrien Cellars, home to Lake Michigan Shore’s favorite Rhône Rangers, Wally & Katie Maurer.I stumbled upon the Domaine Berrien Tasting Room with less than fifteen minutes to closing time, having just missed the syrah punch-down, and by default, the punchdowner—Wally Maurer had by then skedaddled back to the homestead.  Katie was there, however, and was more than happy to lead me on a palate promenade through the winery’s latest releases (tasting notes follow) and share a bit of Domaine Berrien’s history, suddenly making my need for speed seem silly indeed. 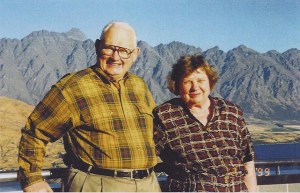 The eighty acre spread that is now Domaine Berrien was first planted to grapes in 1992 by Katie’s parents, Tom and Abigail Fricke after they’d bought the land from a cherry grower.  Tom had been a partner in Wally’s cellar winemaking and both had a keen onward-and-upward philosophy, but the Maurers were then trapped in Chicago, living out a quotidian nightmare while dreaming of the weekends they could spend at the farm.

Meanwhile, rather than dive into a full-fledged winemaking operation, Tom Fricke was content sell his surplus grapes to local vintners while continuing his travels and enological research. What he discovered was astonishing: As Katie recalls, “He became convinced that the microclimate of Berrien County was similar enough to that of Northern Rhône to make the cultivation of syrah, marsanne, rousanne and viognier possible.” In fact, the property is situated at elevations of around 900 feet, making it one of the highest points in the county. Plus, the phenomenon known as ‘lake effect’ provides an extended growing season that allows red wine grapes to fully ripen.

“Our vines are located on south-facing hills and trellised north/south,” Katie continues.  “That brings even sunlight to both sides of the vine, translating to quality and complexity in the finished wines.” Such fortuitous terroir allows the couple to slap a somewhat ambitious addendum on their label: ‘Estate Grown’.  This is a legal mandate ensuring that the grapes within the bottle are grown ‘on land owned or controlled by the winery within the boundaries of the labeled viticultural area.’  (TTB, 27 CFR 4.26)

Wally Maurer writes, ‘All of our wines are made from grapes grown in our vineyards and all of our winemaking and bottling takes place right here on site as well.  This gives us the control over the grapes and we make decisions all during the growing year that maximize the quality (not quantity) of our grapes.  This gives us a higher probability of producing the most premium wines.’

Alas, both Abigail and Tom Fricke passed away in 2007, but they stuck around long enough to see Domaine Berrien founded in 2001, after Wally and Katie chucked in Chicago for the sticks of Berrien.  I know, I know—friends don’t let friends buy vineyards.  But in this case…

“Our first vintage produced only 750 cases of wine,” reports Katie, “but it sold out quickly.  Now we’re up to 4,500 cases, all made from grapes grown here on the property.  We were the first winery in Michigan to release a commercially grown and vinified syrah, and I have to say, it was due to Dad’s foresight and vision.  Along with my Mom, his memory lives on in the vineyards.” Among the wines sampled, not all were Rhône expats; Domaine Berrien’s ‘Crown of Cab’ is considered their top selection—it contains all five allowable Bordeaux varietals for reds.  My review of the 2006 ‘Crown of Cab’ was somewhat less than stellar, but what do I know?  Anyway, this time around, the vintage over which I kvetched with Katie was 2008, and it redeemed itself considerably.

And yet, for my tastes, the wine that packed in the most surprises was the 2010 viognier—a recalcitrant little minx if ever a varietal were.  Before New World wineries like the Maurer’s tried their hand at viognier, scarcely 35 acres remained in France, its motherland.  Part of the deal is that it is low-yielding and difficult to grow, being especially sensitive to damp mildew in wet climates… like Berrien County.  Even so, Domaine Berrien is producing a neat, aromatic viognier that is loaded with nuance and depth. Not only was I impressed that Wally and Katie are able to successfully farm this fractious fruit, but that they can get away with selling it for under $16 a bottle.

“Well,” responds Jen Bixby, Domainatrix of the DB tasting room, “when you’re pushing a varietal that doesn’t have a lot of shelf exposure, it’s all about education, education, education…” Jen offered me some valuable education, too—nothing to do with the wine she pours, though.  It was how to navigate my way back to a homeward-bound  highway.

And you know what?  With a new winery to write about and a gentle viognier buzz floating around my central nervous system, Michigan in November winds up being a pretty spectacular place after all.

Viognier on the vine

Domaine Berrien Viognier, Martha’s Vineyard and Tom’s Vineyard, 2010, around $15.50:  I have a sharp tongue, but it’s usually pretty good at picking out   residual sugar percentages.  With Domaine Berrien’s 2010 Viognier, my mouth was still full when I blurted out 2.3%, which was not only rude and messy, but wrong.  An instant later, the whole floral, fruity, fantabulous quaff dried out.  In fact, this vintage was picked at 22.8° brix.  Below 22° brix, viognier is a bore and hardly worth bottling, and though the .8° may seem a negligible uptick in sweetness, a mysterious viognier trait is how quickly the aromatics and sugars develop after that magical plateau is reached.  The art of producing top-flight viognier is recognizing precisely when to harvest—something that Wally Maurer apparently has down.  The wine is scrumptious, with subtle honeysuckle, orange blossom and pineapple on the nose, followed by an extremely fruit-sweet mid-palate (which I mistook for residual) juicy with tangerine, grapefruit, apple and a touch of anise.  Finishes tart and a trifle quickly; being cold fermented in stainless, there’s no oak to throw a farewell party once the wine’s in the gullet.

Domaine Berrien Cabernet Franc, Abigail’s Vineyard, 2009, around $15.50:  Not a bad output for a very challenged vintage.  The wine lags a bit in fruit, but there is a solid core of recognizable cab franc cranberry and raspberry with a bit of bell pepper to indicate the short season.  Bright acidity balanced by a bit of malolactic cream; the wine sees a full year in casks and ten months in the bottle before release.

Domaine Berrien Pinot Noir, Martha’s and Katherine’s vineyards, 2007, around $15.50:  I tasted this wine last year, and it has undergone a nice aromatic evolution since then; it glows with tart cherry and violet and finishes with a toasty bite from French oak.

Domaine Berrien ‘Crown of Cab’, Abigail’s Vineyard, 2008, around $19.50:   Far more fruit-forward than the ’06, this Crown featured rich with soft slate, blackberry, smoke and earth winding through well-integrated tannins and hints of dark chocolate.

Domaine Berrien Marsanne, 2009, around $13.50:  Bright citrus and stone fruit dominate the nose; the palate is light but pure with apricot and lemon grass as the dominate flavors.  Certainly a great introduction to this varietal for the eager neophyte.