Hallowine and Spirits: What To Serve the Sots on Spook Night

Trick or trink, smell my dink, give me something good to drink…

When  it comes to suggesting Halloween hooch, wine writers can take one of two paths:

One is to recommend all the customary cornballs classics like PoiZin (by Armida Winery), Trueblood (Napa Valley), Ghost Block (Yountville), Vampire wines (Paso Robles), and of course, anything from that spooky Left Bank appellation, Graves.

The other path is to get it right—the real monster deal.  If I was writing this article, it might go something like this: 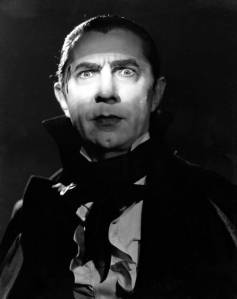 Though Drac himself vould likely stick to sangria, Jonathan Harker, having just arrived from vine-free England, might be more inclined to experiment with the local wines—especially if he’d known that one day, renowned wine author Tom Stevenson would say, “Of all the wine growing regions of Romania, Transylvania is perhaps the most exciting.”  They’re primarily whites: Târnave, Alba, Sebeş-Apold, Aiud and Lechinţa. Though many of the tiny Transylvanian vineyards disappeared in the wake of post World War II Communist collectivization, it appears that in the modern era, such garden-vines are reanimating themselves.

For Van Helsing, we will reserve a bottle of that odd Dutch liqueur Parfait d’Amour, a purple concoction with a curaçao base and flavored with rose petals, vanilla and almonds.

Just back from Tibet, acclaimed and wealthy British botanist Wilfred Glendon would probably tuck into a snifter of London No. 1, among only a clawful of gins actually brewed in London.  In line with the classic gins of yesteryear, featured in the recipe are juniper, coriander and angelica, but unmentioned on the label is the secret ingredient: mariphasa.  Va-va voom.  Once Glendon’s shaggy makeover is complete, the only direction for him is toward Sangre de Toro, Miguel Torres’ blood-red flagship.  Made from Garnacha and Cariñena, its bold temperament but soft mouthfeel make it an ideal compliment to any meal—even the girl next door. 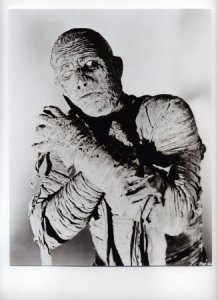 For The Mummy, choices are somewhat limited—too bad, since after four thousand years in a sarcophagus, one builds up a pretty mean thirst.  Prior to his death (the first one), Imhotep no doubt drank beer—it was the ancient Egyptian’s most important beverage, and in this case, it put the ‘high’ in priest.  According to hieroglyphs it was called hqt  and probably came in at around four percent alcohol—it would have been thick, sweet and without carbonation.  The Egyptians had wine as well, known as yrp, but it was expensive and consumed only by the rich—in fact, in 2006, traces of it were found in King Tutankhamen’s tomb.  Anyway, the yrp is gone and it ain’t coming back.  For our thoroughly modern mummified Millie, however, all is not quite lost.  These days, Egyptians make a limited amount of wine near Alexandria—per year, about half a million gallons of Omar Khayyam (a very dry red), Cru des Ptolémées (a dry white) and Rubis d’Egypt (rosé).  A few rehydrating swigs of any of the above and Imhotep’s wrinkles should vanish quicker than if he’d used Porcelana.

Far more fortunate is Victor Frankenstein.  His castle nestles in the cliffs of Darmstadt, Hesse—a 2-wood’s drive from the Rhein River. Rheinhessen is the largest of 13 German high-quality Prädikatswein wine regions, and so, Dr. Vic would have access to a wide variety of styles, from the simplistic Liebfraumilch to the beautiful, sweet, botrytised wines of Gunderloch.

Captain Walton would have had to limit himself to whatever he kept in his cabin cupboard, probably brandy, madeira or rum.

For now, we’ll keep the monster dry, since anything we give him simply pours out of the holes in his neck, but he says it’s cool—he doesn’t drink anyway.

So, that’s path two, kids; the genuine ghastly gig—though if you didn’t get anything useful out of it, feel free to go back to path one.

This entry was posted in GENERAL and tagged Bela Lugosi, Boris Karloff, Wines for Halloween. Bookmark the permalink.

1 Response to Hallowine and Spirits: What To Serve the Sots on Spook Night