Throughout the summer and fall, choose a seacoast, find a river bank with a fast riffle or slow eddy or plant yourself in the middle of a fresh water lake anywhere in the United States and chances are that there’s a fish harvest nearing peak season. From May to September, ripening as vigorously as that creamy avocado or succulent peach, fish—both shell and fin—are running… frequently for their lives.

For lovers of the lighter, racier drinks of summer and the healthy foods they compliment, there is no better marriage than wine with fish.

Taking no glory away from harvest-time produce, which nourishes the eye and body in equal measure, fruits and vegetables tend to be less wine-friendly than fish and may be better experienced in a judiciously cast supporting role. Either way, food at the peak of freshness, whether it swims, skitters or dangles from a branch, is the hallmark of history’s greatest cuisines.

"Are the salmon running, or is Sacajawea in heat again?"

Fishing isn’t for everyone, but if you happen to be hooked on the sport, bull trout, rainbows and cutthroats can be had from mid June through late August, though there is no question that the Chinook is the king of angling. The largest and strongest of the Pacific salmon, Chinook were a favorite meal of Lewis and Clark and can weigh upwards of eighty pounds. Chinook flesh is prized for its oily texture and complex flavor, which leads to a quintessential fish-with-white-wine mythbuster: as regional foods and wines often have a natural affinity for each other, there’s no better sip with a fresh-from-the-salt Chinook than a low-tannin Oregon Pinot Noir. It’s seafood synergy at its best. 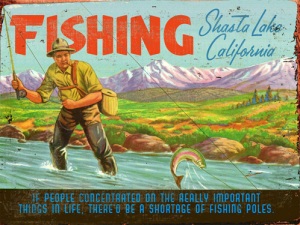 Meanwhile, northern California plays host to some of the most prolific trout streams in the west; the Upper Sacramento alone boasts nearly seven thousand trout per mile. As challenging as they are beautiful, emerald pools and pocket waters along Interstate 5 are home the native Shasta Rainbow—so highly regarded that it’s been stocked worldwide—while trophy browns abound. Equally appropriate for a roaring campfire as for a Five Diamond restaurant menu, trout is leaner, sweeter and more delicate than salmon, and is a wonderful foil for seductive, lesser-known white varietals like Semillon, Chenin Blanc, Viognier and especially, a young, lively Colombard.

Albacore (the only fish legally entitled to be called ‘white tuna’) are also an affordable Pacific coast treat available throughout the summer; albacore’s upscale cousin, yellowfin (also known as ahi) is richer, fattier and costlier, though tends to drop in price toward the end of the season when these migratory fish start running off Hawaii. The former pairs well with Pinot Blanc, the latter (especially if seared or blackened) is a classic match with a low-acid Syrah.

Now pull a rakehell turn and head cross-country, bringing along your heavy-duty, medium and ultra-lite fishing gear—you’ll have ample opportunity to explore fishing holes throughout the Midwest. By the time you hit New York’s Finger Lakes, you’ll be pumped to troll for walleye, perch and bass. Finger Lakes viticulture is rich in history and includes the oldest bonded winery in the United States, Pleasant Valley. Cool weather varietals predominate, of course, and crisp, mineral-laden Rieslings, multi-styled Gewürztraminers and notably, lightweight Pinot Noir—said here to be unusually high in the antioxidant resveratrol—are perfect balances for the nearby freshwater catches.

Farther east, the seaboard serves up plenty of shelled delicacies—the ‘other’ seafood. Though dwindling in numbers, lobsters still rule in New England, while on Long Island, Little Neck Bay produces the sensationally tender clam that bears it name—not to be confused with ‘golden littlenecks’, the tougher, if flavorful ocean quahog. Returning the name favor, The Big Apple, a.k.a.The Big Oyster (along with Ellis Island’s original moniker, Little Oyster Island) pays homage to the bivalve beds that once flourished in New York Harbor.  Currently polluted out of that locale, oysters can still be found up and down the East Coast, both wild and aquafarmed, differing dramatically from their West Coast cousins due to Atlantic tides, algae, and mineral content. Dreadful to look at—crooked, fused, muddy and covered in barnacles—salty-sweet oysters are a luxury taste that is flattered by a high-end sparkling wine.

Heading west once again, in Washington State, black gold is not synonymous with Texas tea; it’s regional slang for mussels. And unlike Jed Clampett’s oil reserves, these chewy bivalves are as easy on the pocketbook as they are on the environment. At their tip-top throughout the summer months, mussels are often grown on ropes hanging beneath rafts throughout Puget Sound. Mussels, like the coldwater shrimp and the magnificent Dungeness crabs caught off the Pacific Northwest, would be well-matched with a homegrown local white; a Columbia Valley Riesling, for example, whose all-star cachet is currently enjoying a renaissance.

Meanwhile, experiment. Mix and match. If a particular seafood and wine doesn’t work for you, try another: Like the old adage promises, there are plenty of fish in the sea.

Tasting Notes You Can Take To The (River) Bank:

Hugel et Fils Gewürztraminer, ‘Hugel’, 2009, about $22: A solid, entry-level Alsatian gewürz with a characteristic rose-perfumed bouquet and an unguent mouthfeel; mango, lychee and lemon along with a spice-rack of oriental flavors.

Amalie Robert Pinot Noir, Dijon Clones, Willamette Valley, 2008, about $40: Send in the clones; nothing Grey Poupony about ‘em. The rootstock comes from Burgundy, the wine from Oregon’s premiere AVA. This cherry-cinnamon blockbuster is coming into its own and will continue to evolve for years.

Chéreau Carré Château de Chasseloir, Muscadet Sèvre et Maine Sur Lie, Loire, 2010, about $12:  Chalky, vivid and almost salty, this unusually full muscadet is almost Burgundian in style; it will pair perfectly with oysters on the half shell and still hold its own with cream sauce.

This entry was posted in PAIRING WINE AND FOOD and tagged pairing fish and wine, Wine with fish, wine with seafood. Bookmark the permalink.