Ryan Waugh is the kind of winemaker who believes that 90% of a finished  wine happens inside the vineyard, and he insists that the three thousand cases of wine he made in 2009 prove him out.

He’s  also believes that 100% of appendix attacks happen inside the vineyard, and a single case is all the proof he needs.

Last year, on the final harvest day for his flagship cab, Six Degrees, he called his wife complaining of mysterious, horrendous gut cramps.  Crystal Waugh’s initial impulse was to panic; mine would have been to say, “Geez, Ryan, if you don’t recognize the symptoms of appendicitis, maybe it’s better you  went into wine instead of internal medicine…”

His parents may not agree.   Ten years ago, Waugh had a biochemistry degree from Santa Clara University, had passed his MCAT exam with flying colors and was only a dorm-room deposit away from med school when a ’76 Stag’s Leap Lot 2 intervened.

A friend’s dad shared a bottle with him, and from that point forth, the only flying colors Ryan Waugh saw were cabernet red, chardonnay yellow and maybe a bit of riesling white to round out the spectrum.

“Saying that the Stag’s Leap changed my life puts  it mildly,” he claims of the epiphanal chugalug. 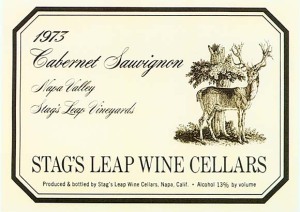 How good was it? Keep in mind that 1976—the year on that bottle—was also the year that Stag’s Leap won the so-called ‘Judgment of Paris’ competition, beating some highfalutin hyphenated First Growths and becoming California’s shot-heard-round-the-wine-world.  That one was vintage 1973.  Three years later, according to Wine Advocate, Napa had an even better growing season.

“I just fell in love with what wine could do, what it could be, so I went out immediately and began to look for work in a winery.”

Savannah Chanelle in the Santa Cruz Mountains hired him, and there, under the tutelage of  Michael McNeil he learned as much about the philosophy of grapes as well as the farming and vinification.

Talk about your rakehell turn.   In a few short months, Waugh abandoned visions of puking toddlers, diseased spleens and appendectomies other than his own and relinquished an antiseptic career in operating rooms for the musty cellars of Northern California.

That was a decade ago.

The Six Degrees of Separation?

So today, we’re inside the Grapevine, a pretty little cosmo Novi wine bar, and Waugh pours a glass of his inky-purple Six Degrees 2006, second vintage of his flagship wine which hails, in the uppermost reaches of the Mayacamas Mountains, from two scant acres—appendix acres, you’ll recall.

As far as I can decipher it, ‘Six Degrees’ is not named for the desperate units of distance you’d place between yourself and Kevin Bacon’s rock band, but rather, the degrees of physical separation between planet earth and a wine drinker—in other words, the soil, the vines, the grapes, the barrel, the bottle and finally, you—or Kevin Bacon in case he just dropped over to push his new CD.

The cabernet is the culmination of Ryan Waugh’s California Dreamin’ and possibly, his answer to Warren Winiarski’s evocative, smoky 1976 gem.   Six Degrees’ alluring nose is ripe with black fruits, extraordinarily precocious and elegant , filled with rich, formidable tannins that are polished enough for drinking tonight, but which will have improved immeasurably a decade from now.   And at $85, it’s a relative steal, considering that Waugh only produced 380 cases—by coincidence, the same as the number of people who saw Kevin Bacon’s last movie.

Six Degrees is such a soul-warmer that I’m confident that Waugh’s folks still tell the mah jongg circle that their son practices internal medicine.

Waugh: What is it Good For…?

…Absolutely something, including a whole slew of new releases.  And,  as long as I had the expansive, self-confident Ryan nailed down to a Grapevine booth,  I persuaded him to uncork a few of them.

Further details are given below, since, unlike the winemaker, this column tends to be overloaded with appendixes.

Appendix One:  Waugh Cellars Riesling, Santa Barbara, 2008, about $31: What’s wrong with this picture? Riesling is a cool weather grape and Santa Barbara is hot weather central.  ‘Carpenteria’ is the secret, according to Waugh—it’s got its own little Rhinish microclimate,  plus the vineyard is  ‘two miles from Oprah’s house’.  Oprah, by the way, is ‘so what?’ spelled backwards.  Luckily, the wine is pure ‘what’; fat and fruity like Oprah, but revealing more depth and breeding.  A nose of apricot, white peaches and spicy pear leads to a mid-palate of pure personality—chamomile and verbena along with a wonderful finish filled with mineral-laced stone fruit.

Appendix Three: Waugh Cellars Zinfandel, Dry Creek, 2005, about $23: The purity of fruit forming the core of Ryan Waugh’s style is nowhere more evident than in this wine from zin’s favorite Sonoma hangout.  Elegant, ripe and round, it shows off a panoply of zinfandel’s prized flavors—brambly raspberry, rich, smoky blackberry and great depth of earth, anise, cedar and cranberry.

Appendix Four:  Where To Buy:  Retail-wise, Waugh is only available in three states; Texas, Ohio and Michigan (lucky us), your best bet is to get in good with Crystal Waugh via the website: www.waughcellars.com