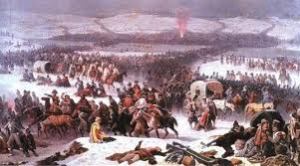 The Russian Empire has twice been saved by the sheer illogic of her enemies—first in 1812, when Napoleon sent a quarter million French-speaking lemmings toward Moscow (and off the cliff they promptly went), and again in 1941, when the Master Race found itself racing back to the Master with the Bolsheviks snapping at their heels.

With all those near-misses, you would think that the Russians would put a premium on logic.  But you’d think wrong, at least when it comes to alcohol consumption—or such has been my experience.

Which came first, Dumbo or the egg?

In the brief weeks I spent in Russia, I turned down more alcohol than I normally consume in a year, mostly to the head-shaking and eye-rolling of my kind but compulsive Soviet hosts.  Six, seven, eight shots of vodka was the after-dinner norm; multiple toasts saw that number rise exponentially, and many was the time I stumbled downstairs the following morning with a head the size of Red Square and found that the Russians were still at it—although by then they’d switched to sweeter stuff, like buffalo grass-flavored Żubrówka.  Granted, these may have been exceptional circumstances—somehow, in between hangovers, the Soviets have managed to beat us into space, invent the Fabergé egg, build thousands of strategic nuclear warheads and learn how to read and write in Russian (try that with a brainful of slivyanka).

Plus, any nation that manages to scare the bejeebers out of evangelical conservatives can’t be all bad.

Masque of the Red Death

Nonetheless, alcoholism has been the Great Bear’s bugbear almost since day one.  Blame interminable winters, a cultural shrug dating to the tenth century and the Duma’s tacit approval of over-indulgence in order to increase tax revenues.  Various attempts to curb the thirst have failed as soundly as our own Eighteenth Amendment, and in fact, drink consumption has risen threefold over the past twenty years, now accounting for more than half of Russian deaths.  It’s like a paraphrase of Mark Twain’s old saw about the weather: “Everybody talks about those perma-snockered Russkies, but nobody does anything about ‘em.” 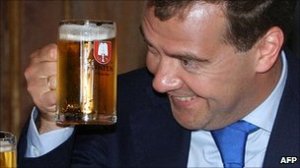 "Please everyone, a big nazdaróvye to the Russian wine industry!"

So, back to the column’s leitmotif—Soviet logic—and an article I recently stumbled across in the online Moscow News.  It seems that Russian president Dmitry Medvedev, but one in a long line of Federation leaders to take a stab at soberizing his constituency, has suggested a promotion of Russian wine as the solution to alcoholism, stating (with a straight face), “Russia’s drinking problems are due to other drinks.”

Like most of you, I am all for the promotion of wine—writing about it, reading about it, thinking about it, bathing in it and—if your ‘I Can Handle It’ dues are paid up in full, for drinking it.  At tastings, of course, we swirl, sniff, sip and gack mouthfuls into gross spittoons, and realistically, in these early sanctimonious years of the twenty-first century, a glass or two of wine is all you can consume w

ithout risking your career on a DUI.

But bonafide, chronic alcoholics, of which Russia is said to have more than two million, find it a bit tough to stop after two, or five, or twenty—and the honest ones will tell you that it doesn’t matter if it’s wine, slivyanka, Sterno strained through cheesecloth or self-administered moonshine enemas.  So, the idea that you can ‘wean’ drunks off the hard stuff by introducing them to soft stuff is about as ludicrous as thinking you could put SAMs in Cuba and we wouldn’t blink.  Better you should try curing heroin addicts by feeding them government-funded methadone—another bright idea that accounts for nearly four thousand American deaths a year.

(Ironically, methadone as opiate replacement therapy is illegal in Russia since health official do not believe it works.  They recommend instead, complete abstinence.)

All that said, just as the numbers of Slavic sots is increasing, the Soviet wine industry has begun to focus on a higher quality of abusable substance, slowly moving away from the super-sweet stuff that accounts for more than three-quarters of all wine sold in Russia.  French/Russian joint ventures like Chateau Le Grand Vostok are now producing drier wines from Bordeaux varietals along with native cultivars like saperavi, rkatsiteli and golubok.  Ilya Grekov, who heads up sales at Le Grand Vostok, believes that the Russian love affair with vodka is a direct result of the lousy wines of the past.

Says Grekov, “I’ve got a friend who is a very intelligent, well-educated and successful person – but [until now] he couldn’t find any dry Russian wines at all.”

Abrau Durso is another quality house; it specializes in sparkling wine, which it has been producing since 1896; about 15% are made under méthode champenoise strictures with the remainder using the charmat process.  Unwilling to totally relinquish the sweet-tooth demographic, Abrau Durso also makes a sugary sparkler called Yublileynaya (Jubilee) and a red version (no pun) tagged Velvet Season.

Between the Black Sea and the Azov Sea on the Taman Peninsula is the region’s largest winery, Fangoria; it produces more than five million gallons of wine per year, including high-quality dry wines under the Cru Lermont label. They also bottle an odd, Baba Yaga-approved concoction called Cherny Leker (Black Healer)—a blend of cabernet sauvignon, saperavi and ranniy magarach together with an assortment of herbs.

Gai-Kodzor Vineyards was established in 2006 at the foothills of the Caucasus Mountains—the range that gave white people their name—and has become known as an outstanding producer of Alsace-style gewürztraminer and muscat along with Rhône-like roussanne, viognier, merlot/grenache and syrah.

Other Russian wineries on the fast-track to success are Karakezidi, Lenina, Mirny and Sauk-Dure.  As output increases and quality improves, more and more of these wines should filter their way to us in the West, and I, for one, am all for rolling out the Red carpet.