Calvados: The Apple of My High

Wherever mankind blazed his imperialist trail, booze soon followed.  Using whatever was fermentable, findable or farmable, liquor has been distilled by thirsty barbarians since the 2nd millennium B.C., taking any guise that propriety demanded: medicine, holy elixir, even fuel.  But at the close of the day, the consumption thereof was the end game.

Sobriety hangs out in celibacy’s dark corner as a profoundly unnatural, if sometimes prescribed state of the species.  Another couple of Apollo landings and we all know perfectly well there would have a been a still in the Sea of Tranquility gleefully cranking our moon juice from dust wine.

So it’s no wonder that  we can trace the age-worthy apple brandies of Northern France to at least 1554, when a fellow called de Gouberville wrote a treatise on cider distilling—a process that became necessary after various famines forced barley growers to turn their produce into edibles instead of drinkables.  Farmhouse versions of eau de vie de cidre, then called ‘calvados’ only colloquially,  have probably been made since Charlemagne’s time.

The wonder is that more Americans haven’t heard of it—it’s that good, that unique, that chic in modern Parisian cafés.  If Eve sold her soul for a single apple, it boggles the mind what she might have offered up for a shot of double-distilled Hors d’Age from the pays d’Auge appellation contrôlée.

Calvados is Normandy’s answer to Cognac; an oak-aged, Big Brother-regulated spirit which lists numerous must-haves and must-bes among its legal imperatives.  For starters, to wear the Calvados label, the liquor must originate within the confines of the département of Calvados or smaller areas of Manche, Orme, Eure, and Seine-Maritime.  The truly top-shelf stuff comes from d’Auge, one of three AOC appellations which limit production to a specific geography, a certain distilling method and the length of time the brandy must sit around in barrels before it’s released.   Calvados must be made from specifically earmarked apple varieties (except for Domfrontais, which not only allows, but demands the inclusion of pears); up to two hundred types of apples are allowed, and most Calvados producers use a blend of many—ten being about the minimum and forty, seemingly, the average.  These include the sweet duret, the tart rambault, the bitter mettais—even the Flower of Kent, the apple that conked Newton on the head.  Some taste better than others, but safe to say that they are not the aesthetic specimens that show up in little Billy’s lunchbox—they are raised for oomph, not beauty. Says Claude Camut of Calvados Adrien Camut brand, “In Paris, they think it is funny we make such a marvelous spirit with such horrible-looking apples.”

Adhering to the season is more a matter of experience than governmental dictate.   Fruit intended for Calvados is harvested between September and December and undergoes an critical resting period in wooden crates before the January crush.  From there, the juice undergoes a fermentation period similar to wine; a minimum of six weeks on natural yeasts in which the sugar is converted to alcohol.  Whereupon it is distilled.   Essentially, this is a process in which the fermented cider is heated, and since alcohol evaporates at a lower temperature than water, so as long as you keep the heat below the boiling point, the resulting steam is mostly hooch.  The coiling copper tubes you see in comic-book stills are in fact a necessary component in the next step, when the vapor is condensed back into liquid, which is clear, harsh and eye-poppingly potent.  Many Calvados brands undergo a second distillation to refine the liquor; pays d’Auge requires it, calling for an alembic pot still rather than the column still used by the single distillers. 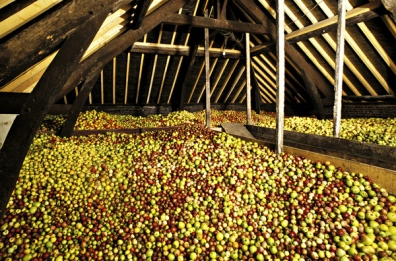 Apples mellowing in a Norman attic

It’s the careful aging in used oak barrels (new ones soak up too much flavor; at Busnell, barrels may be two hundred years old) that really defines the final product; wood is what makes Calvados out of applejack.  The more it sits, the more it mellows—the price tag becoming correspondingly less mellow along the way.  Entry-level Calvados has seen a minimum of two years aging; the equation is open-ended for the most expensive—when you see an ‘age’ on a Calvados label (four-year, six-year, eighteen-year), it refers to the youngest liquor in the bottle—they are all blends of warehoused spirits.  Most Calvados producers will tell you that the magic is in the mix; Calvados bearing a specific vintage year is more for consumers to whom that particular year might have significance: unlike grapes, apple harvests are pretty consistent.

You may find other liner notes, similar to what you’ll see on aCognacbottle: V.S.O.P., Extra, X.O. Napoléon, Hors d’Age and Age Inconnu may appear as ascending orders of cost and quality.  ‘Fermier’ is literally ‘farmhouse’ Calvados; when it appears on the label, it indicates a strict adherence to old-school technique—cider house rules if you will, with apologies to Mr. Irving.  There aren’t many farmhouse Calvados’s left (Calvadi?); Claude Camut calls himself a farmer-producer, while most of the rest now comes from four conglomerates—Boulard, Busnel, Père Magloire, and Gilbert.

Times they are a-changin, but the role that Calvados has played in Normandy’s story is not.  According to the historically irreproachable Astérix et les Normands, Calvados was the favorite drink of the Vikings, which may explain their war record since 1200.  James Bond sips it in On Her Majesty’s Secret Service, neither shaken nor stirred.  Canadians adore it, but explaining anything related to that frozen race is a whole different treatise.

If you’re a Calvados virgin, keep in mind that Normans traditionally down a tot between courses—as a digestif and often accompanied by apple-flavored granité .  If they can’t wait until the end of the meal for their Calvados, chances are the lifetime you’ve been waiting is seriously too long.

This entry was posted in Miscellaneous. Bookmark the permalink.

1 Response to Calvados: The Apple of My High