‘Been Doon So Long’: A Bonny Good Read

When I was a young turk just discovering that unlike the jug of Gallo that my mother hid under the sink, wine isn’t universally sold by the tanker-load, I tripped across a intriguing red with a baffling and irreverent name—Cigar Volante.

If you don’t know the story behind ‘Flying Cigar’, it’s worth a Google moment.

From that single bottle I was turned on not only to the alchemy of Rhône varietals, but also the notion that wine could be as fun to market as it is to drink.

When I finally met the winemaker , Randall Grahm, during a last-century whistle-stop tour, I made sure to get my picture taken alongside him, and that I still display proudly.  Can’t necessarily call him a mentor because I have no winery, but I could say that Cigar Volante was my abecedary—just the kind of word that Grahm, as accomplished a wordsmith as he is a vintner, would appreciate.

It stands to reason that this visionary artisan, this philosophizing philistine, this star-gazing scribe whose floral wines are always accompanied by florid prose, would sooner or later put together a collection of his literary vignettes.

‘Vignette’, as Grahm certainly appreciates, is French for ‘little vine’.

Now, Doon to the Book…

As a winemaker-cum-James-Beard-Award-Winning-celebrity, Randall Grahm belongs to his own frenetic  Four-H club: Honesty, humor, humility and hella punster.  Some might tack on a fifth ‘H’ for ‘hubris’, as, throughout Been Doon So Long he rails against the banality of consumer darlings like chardonnay and merlot (insulting potential customers), the myopia of wine critics (insulting potential judges), the boringness of Bordeaux (insulting his colleagues) and the bureaucratic sniveling of the BATF (insulting the folks who control his license to swill).  But having gone from iconoclast to icon, having stayed the course through disastrous vintages, experimental wines gone seriously wrong, the loss of an entire vineyard to a bacterial disease introduced by insects (which he somehow refrains from referring to as ‘doon-buggies’) and having almost single-handedly (and in the nick of time) nudged California winedom from the glare of self-importance to the glow of self-awareness, his opinions—couched in yucks and Yoda-quality insights—are a remarkable treatise worth the eight, ten, twelve weeks it might take you to get through it.

Which is a good thing; the book is coffee-table heavy, and doesn’t require—or even suggest—that you read it all in one sitting.  Like a case of Muscat Vin de Glacière, it’s best enjoyed in increments, sip by sip.

Been Doon So Long (University of California Press, 2009) is chronicle of Grahm’s journey from journeyman to a seasoned winemaker, much of it adapted from his legendary newsletter and told in a variety of genres while he wears various literary hats, including a Sam Spade Trilby cocked over one eye.  He creates , for example, a fictional character called Spenser, Wine Dick who tackles a Marlowe-worthy case.  Grahm’s apology-free obsession with the obscure allows him to parody Cervantes and John Kennedy Toole in a single story title, to nail importer Robert Kacher to a cross (made of new French oak, no doubt) in a J.D. Salinger mock-up, to remake A Clockwork Orange as A Clockwork Orange Muscat (one of his pet varietals) complete with slang from the droogies, here referred to as dreggies, in reference (one supposes) to the leavings at the bottom of the barrel.

The most ambitious parody may be Grahm’s Dante’s Inferno send-up, in which the overblown epic becomes Da Vino Comedy: The Vinferno.  Composed in grueling tercets and canticas—a verse scheme identical to the original—Grahm waxes on for page after page about his favorite theme: himself.  If brevity is the soul of wit, it might follow that a lack thereof is the soul of sh*t, except that the piece winds up jam-packed with clever word-plays, wine world zeitgeist (references to the flick Sideways, for example)  and an astonishing fidelity to the classic.  Plus, no spot quiz Monday morning, first hour. 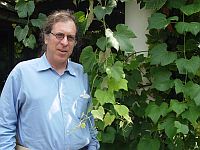 Grahm considers Vinferno to the centerpiece of the book; it’s moral center.  Maybe so.  A word to the wise, though: keep a Merriam-Webster’s handy.

Been Doon So Long a long-winded delight, filled with as many footnotes as phrases, as many puns as pomace; Grahm turns  out brain-twisters like ‘sanguinary, syringadenous and lachrymal fluids’ without turning a literary shade of claret.  This is not to be taken as stylistic criticism, especially since I myself am frequently asked about my alma mater, the Why Use One Word When Three Will Do Finishing School.

If anything about Been Doon So Long earns a thumbs doon (other than his endless use of the word ‘doon’), it’s a single oversight: Alex Gross, who did a series of marvelous illustrations that are peppered throughout the pages, gets no byline, even on the inside cover, but only a miniscule liner note thanking him for permission to reprint, so potentially  they weren’t done for Grahm specifically.  But I sort of doubt that.

Other than that, as an outstanding opus, a rambunctious read, a cacophonous compendium,  I am completely doon with it.

BEEN DOON SO LONG: A RANDALL GRAHM VINTHOLOGY (University of California Press, 2009)\