Posted on September 9, 2011 by intoxreport

As a disclaimer, yes I do have one of those blue eco-friendly Yuppie Guilt Boxes in my garage into which I dutifully deposit all my empty water bottles—most of which come from the island of Fiji aboard huge, oil-ravenous tankers—and yes, as result I go to bed at night confident that I’ve already done my part to save the planet and can therefore eat Snow Leopard burgers and turn up the heat to ninety.

And yes, with my side of frittered Panda, I drink organic wine in such huge proportions that I’m shocked that global warming hasn’t already been halted—nay, that it hasn’t been reversed to the point that we’re all going to freeze to death unless the rest of you immediately turn your thermostats up to ninety and open your windows.

Organic vineyards, as you know, rely on crop rotation, hand cultivation, mulching and soil enrichment (etc.) to embrace a holistic approach to winemaking.  As you may not know, however, legally-blessed ‘organic’ wines need not adhere to any pure holistic practice and nearly all medium to large scale wineries require mechanization (instead of horses) to cultivate, and they are permitted to use a wide range of pesticides, including some (copper-based) that are actually more earth-unfriendly than those that are banned.

Most integrity-focused organic wineries will, on their own merit, use natural as opposed to synthetic supplements in their vineyards; some French houses rely on lutte raisonée, a ‘rational’ approach to such decisions, understanding, for example, that cyanide, nicotine and cocaine are all naturally-occurring chemicals.

So, if not for the good of Mother Earth, are organic wines better for our health?  Do they taste better, or even different?

Quote from the USDA:  ‘No distinctions should be made between organically and non-organically produced products in terms of quality, appearance, or safety.’

Drinking wine stamped ‘organic’ may be the feel-good equivalent of blue recycling boxes, but even so, wine is not a life-sustaining necessity; wine is a luxury.  You don’t have to drink wine, so if you gave it up altogether you wouldn’t even be contributing a plugged-penny’s worth of copper fungicide to the environment.  Of course, that’s you.  Me, I have to drink wine because I’m a wine writer and need my  paycheck so I can afford gas for my Land Rover LR4.

(Kidding on the Land Rover.  Actually, I drive a Civic with so many friggin miles on it that it couldn’t pass an emissions test if whatever God those kwazy Japanese believe in dropped by to tune it up Himself).

In conclusion, earth children, a wine that is certifiable as ‘organic’ may be doing more for its PR than it is for its planet.

So let’s move on to those touched souls who practice biodynamics—and this includes one of my favorite vintners, Randall Grahm, a winemaker/bon vivant who is as dynamic as his bio suggests.  But stark raving nuts?  Let’s just say that when we refer to him as ‘certifiable’, we’re not talking organics.

So you shouldn’t misunderstand, insanity is a quality inherent to most winemakers or else they’d have stuck out law school.  Yet biodynamic methodology subscribes to such a bizarre set of techniques that most inmates cross to the other side of the asylum when the biodynamic bunch come out to play.

No? Okay, if  I was to list three biodynamic preparations meant to energize compost while aligning the earth-organism with the cosmos, could you guess which one was legitimately biodynamic and which two I made up on the spur of the moment?

Wrong, they’re all real—Preparations 502, 505 and 506.  And in case you’re wondering (like I was), cow mesentery is ‘the double layer of peritoneum that suspends the jejunum and the ileum’.  Everything clear, now?  Snow leopards have mesenteries too, but snow leopards are endangered so organic whizbangs avoid using them. 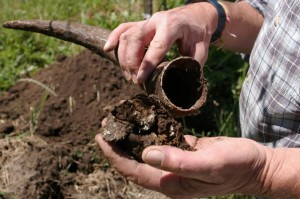 Another tried and untrue biodynamic concept involves filling  a cow’s horn with manure and burying it in the vineyard.

Proponents grasping at organic straws claim that this encourages the growth of beneficial microorganisms;  I claim that I once had a friend who was a perfectly normal guy except that he had to touch his left earlobe every time somebody said the word ‘purple’.   I’m sure if I suggested that he could cure that tic by burying a crap-crammed cow horn in his yard, he’d end up doing just that.

On the other hand, OCD may stand for oenological compulsive disorder, and it may mean that if you are so focused on the minutia of vineyard management that you’re scrabbling up dirt at midnight to bury cow entrails, you may be just getting every legitimate detail right too.  That would be one explanation for why, in a blind tasting of ten biodynamic wines vs. ten conventional wines by Fortune Magazine, nine of the winners were cow horn wines.  The overall quality of these products was no doubt the result of meticulous technique, not mysticism. 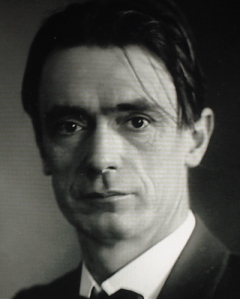 'Rudolf Steiner asked me to stop by and phix your phylloxera problem.'

The biodynamic movement was inspired by Rudolf Steiner (1861-1925), a self-styled ‘social reformer’ who believed in planting according to the phases of the moon, viewing the farm as an self-sustaining organism rather than a sum of parts and in enriching the soil with homeopathic preparation instead of chemical fertilizers which, he taught, can damage the brain.  Above all, his philosophies were grounded in the conviction that nature knows best and science is dangerous.  Much of what he preached, however, has a solid foundation in science and is practiced all over the world by folks who have never heard of him.   Where Steiner and they tend to part company is his professed goal of engaging non-physical beings  (i.e., spooks and fairies, right?) into growing cycles and a belief in made-up factors like ‘dying forces’ and ‘rotten ethers’ that can affect a harvest.

Stu Smith--and no, that dog is not urinating on the riesling vines

This bit of paranormal flim-flam has attracted fringe-element winemakers and led to some resentment from non-bio vintners who feel that there is a growing divisive element between them and their ‘I’m Holisticker Than Thou—Therefore My Wines are Better’ neighbors.  The issue gives Stu Smith of Smith-Madrone Vineyard so much agita that he’s launched a blog entitled ‘Biodynamics is a Hoax—Someone Has To Speak Up’.  Based on credentials alone—Smith is a U.C. Davis Enology and Viticulture graduate while Steiner not only never farmed an acre in his life, he beseeched his followers to provide some empirical evidence to support his theories because he had none for them—I think I’m pitching my pup tent in Smith’s vineyard.

Smith quotes Mike Benziger as saying that ‘biodynamics is the Rolls Royce of organic farming’—an odd analogy considering that a Rolls Royce gets 11 miles to the gallon.  Okay, Mike, in noodling over your Rolls Royce imagery, let’s leave behind biodynamics and borrow instead from psychodynamics: I might project upon these ostentatious hunks of tin such descriptors as ‘over-rated’, ‘costs too much’, ‘nothing that requires presence even in the periphery of Joe Everyman’s imagination’.  Back to biodynamics?  Same terms.

In the end, it’s the wine that seduces me, not the professed morals of the winemakers.  To each his/her own.  Me, I crank my A/C when it’s hot, overload the furnace when it’s cold, and as far as I’m concerned, the whales can save themselves.

Per the above examples, I’m not preaching an avoidance of biodynamic wines by any means.

But if I was, and if I had an organic winery, and if I believed in the sort of ecological integrity that biodynamic winemakers claim motivates them, I’d probably figure I was doing the planet a bigger favor by taking a copy of Rudolf Steiner’s The Philosophy of Spiritual Activity, stuffing it in a cow’s horn and burying it in the yarrow patch at midnight.