Valpolicella: We’ll Have Fun, Fun, Fun Till Daddy Takes Our Wine Key Away

Posted on September 1, 2011 by intoxreport

Some wines have names that are fun to say.  Not the Marylyn Merlot kind of agonizingly clever pun fun, nor Goats do Roam word-play fun, but bouncy domain names and springy varietals that roll off your tongue like one too many roofie.   Gewürztraminer, for example, is fun to say once you figure out how to say it.  Reichsgraf von Kesselstatt can be barked out with a morbid Prussian scowl, frightening your fellow tasters.  Frescobaldi dances in the mouth like saltimbocca. Yalumba sounds like a Zulu war cry, not a viognier.  And when you order Est! Est!! Est!!! you are obligated to change your pitch three times, like Jack Berry did when announcing jokers on the old game show The Joker’s Wild.

That’s the kind of fun I’m talking about.

On the other hand, Échezeaux is not particularly fun to say.  And if the truth is told, unless you have a nicely aged bottle from a decent vineyard, it’s not that much fun to drink either.

Valpolicella is fun either way, to sip or to say; add an additional vowel—almost mandatory in Italian—and you end up with vali-polla-chella—a classic rumba beat.

Veneto, where Valpolicella comes from, is back in the ‘not fun’ category since most Americans will spontaneously place the accent on the second ‘e’, making it Ven-ee-toe, when in fact, the stress is on the first syllable—it should be VEN-ah-toe.

The grapes that make up this fruity, medium-weight red are fun again, since what you see is what you say: corvina, molinara, and rondinella.  Corvina is the workhorse of the trio, up to 70% of Valpolicella’s allowable content by law, and much of the quality of a given vintage of the wine can be assigned to how well the corvina harvest went—too high a yield that year or too chill an autumn results in aggravated grape acidity, and a wine that is sharp and not too much fun.  Molinara can be a problem child as well, with low color extraction, a bent toward oxidation and a similar risk of overt tartness.  Rondinella is somewhat neutral flavor-wise, but a good production grape and resistant to disease, so it kind of acts as Larry to Moe and Curly. 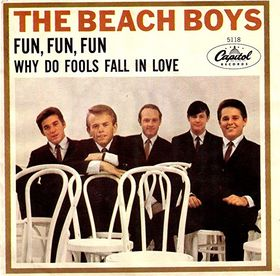 Al Jardine's head makes him look like a Talosian

You’d think the combination of these three stooges should produce some forgettable wines, and sometimes they do.  Robert Parker once referred to Valpolicella as that ‘insipid industrial garbage.’

Apparently, like me, Parker prefers his industrial garbage to be sipid.

But does not our esteemed Wine Advocateeditor agree that when the stars align, when there’s a Classico or a Superiore tacked on to the name, when good grapes lend texture and delicacy, Valpolicella can fulfill five essential wine ‘f’s:  Fragrance, fruitiness and fun, fun, fun.

If not, we can reserve one more ‘f’ word for Mr. Parker.

Santi Valpolicella Superiore ‘Solane’, 2008, about $15: Like the eating-off-the-floor ‘five second rule’, ordinary Valpolicella carries a three year rule; after that, it tends to get a bit fruit-challenged.  Designation ‘superiore’ buys some extra bottle time—in fact, requires it since the ‘ripasso’ technique calls for the new wine to be re-fermented on the skins of a previous batch of Amarone—Valpolicella’s burly big brother—adding weight, aroma, tannin and ageability.  This particular selection, from Frederick Wildman and Sons, offers spicy and herbal overtones including sweet marjoram, cloves, vanilla and black pepper.  Almond flavors, expected in Valpolicella, are present and accounted for. Fruit tones range from dried orange to fresh Bing cherry, everything wrapped in wreathes of smokiness.  A wonderful, soft dinner wine to accompany rich veal dishes, game or pasta.

* Valpolicella means ‘valley of the cellars’.  Ever since those seventies TV commercials hawking Valpolicella (and Soave) for four bucks a bottle, we’ll append it to ‘sellers’.  Remember Bolla?  Too bad, kids:  It has tainted you for life.

This entry was posted in ITALY and tagged Italian wine, Valpolicella, Veneto. Bookmark the permalink.